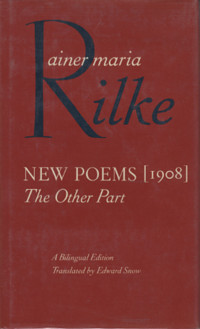 Other authorsEdward A. Snow (Translator)

In 1984 Edward Snow won the Harold Morton Landon Translation Award of the Academy of American Poets for the first volume of these translations of Rainer Maria Rilke's watershed work, NEW POEMS, 1907. His work was praised for the resonance of the English and its faithfulness to the density and meaning of the German. Like the poems in the first volume, these are presentations of objects, "thing-poems" (Dinggedichte). In 1902 Rilke left Germany for Paris where he acted as the secretary to the sculptor Auguste Rodin. Rodin's craftsman-like approach, his steady discipline, and his relentless productivity inspired in Rilke a new poetic method: he, too would be a craftsman meticulously appropriating the world about him for his poetic vision. "Somehow," he wrote, "I too must come to make things; not plastic, but written things--realities that emerge from handiwork. Somehow I too must discover the smallest basic element, the cell of my art, the tangible immaterial means of representation for everything." Until this volume, Rilke's voice had come from the interior, expressing feelings and moods. Though always celebrated for his mastery of word-sound, rhythm, meter, and rhyme, Rilke had written poetry often married by sentimentality and insularity. NEW POEMS represented a turning point, an intoxication from the materiality of the world. NEW POEMS, 1908 contains such famous works as "Archaic Torso of Apollo," "Corpse Washing," "Buddha in Glory," and "Late Autumn in Venice." Rilke takes familiar figures--from a sundial to a stained-glass Adam and Eve--and refracts their presence into corporeality and spirituality. Rilke peers behind sculptural surfaces to the implicit desire or pain in the objects of our environment.… (more)