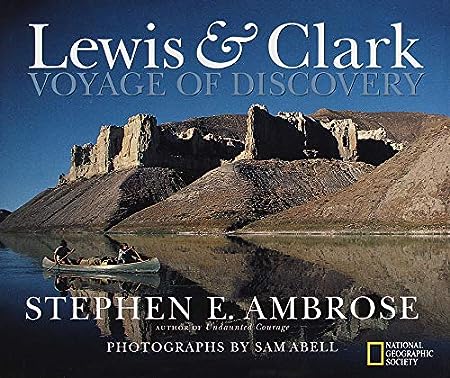 Join best-selling author and historian Stephen Ambrose as he and his family journey in the footsteps of Lewis & Clark. Eight chapters weave Ambrose's rich narrative with choice entries from the explorers' journals, with the author's own story of how his family discovered the Trail today, changed by time but timeless in its inspiration. NG photographer Sam Abell's compelling modern images from Missouri to the Pacific Coast offset historic photos, art, and maps, some sketched by Lewis and Clark themselves. In coordination with the Lewis and Clark IMAX film to be released in 2002, the book features a new introduction by Ambrose, which focuses on the making of the film and the importance of commemorating this critical event in American history through the film. His new introduction is accompanied by full-color photographs of the IMAX filming, to give a fresh and intimate view of the voyage today.… (more)

If you want to learn more about the Lewis and Clark expedition, this is a book to read.

It takes a while to soak in all the beauty of this coffee-table sized book because each photo by Sam Abell is so remarkably vivid that you feel as though you are riding in the swift currents of the tumultuous Missouri river, listening to the loud, terrifying growl of the grizzly bear, losing your footage as you slip down steep inclines, freezing as you trudge in sub zero degrees up over the rockies, experiencing the thunderous bellowing of thousands of bison on the plains and encountering American Indians -- some friendly, some connivingly, aggressively deceptive and war like.

Reaching the destination, the reader feels the breathless elation in Clark's exclamation of "Oh, Joy!" while standing on the Oregon coast watching the Pacific waves crash on the shore line.

Highly recommended for those who enjoy American history.… (more)
2 more
LibraryThing member wesh
Lovely photographs. The text breaks no new ground, but is a useful companion for explaining the photographs.
LibraryThing member hslone1
Great book with an indepth look at what went on with Lewis and his "dark days." It's good that he asked Clark or the expedition might not have been so successful. Although this was historical fiction, Ambrose paints his picture with lots of facts. He makes you believe that he was there first person. I did not have a clue about the danger and hardship that these people experienced in making this trip before reading this book. Neither did I know about the lives of Lewis and Clark after their return. It is a sad thing to know about Lewis's last days.… (more)
Fewer

The journals of Lewis and Clark by Bernard DeVoto
Undaunted courage : Meriwether Lewis, Thomas Jefferson, and the opening of the American West by Stephen E. Ambrose
The Lewis and Clark journals : an American epic of discovery : the abridgment of the definitive Nebraska edition by Gary E. Moulton
Long day's journey : the steamboat & stagecoach era in the northern West by Carlos A. Schwantes