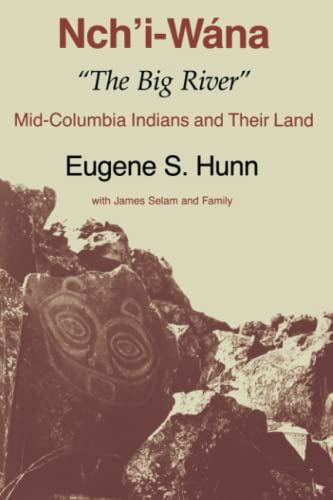 Nch'i-waﾌ］a, "the big river" : Mid-Columbia Indians and their land

The mighty Columbia River cuts a deep gash through the Miocene basalts of the Columbia Plateau, coursing as well through the lives of the Indians who live along its banks. Known to these people as Nch'i-Wana (the Big River), it forms the spine of their land, the core of their habitat. At the turn of the century, the Sahaptin speakers of the mid-Columbia lived in an area between Celilo Falls and Priest Rapids in eastern Oregon and Washington. They were hunters and gatherers who survived by virtue of a detailed, encyclopedic knowledge of their environment. Eugene Hunn's authoritative study focuses on Sahaptin ethnobiology and the role of the natural environment in the lives and beliefs of their descendants who live on or near the Yakima, Umatilla, and Warm Springs reservations.… (more)

With One Sky Above Us: Life on an Indian Reservation at the Turn of the Century by M Gidley
The Canoe and the Saddle; or, Klalam and Klickatat by Theodore Winthrop
The Indians of Puget Sound : the notebooks of Myron Eells by Myron Eells
I will tell of my war story : a pictorial account of the Nez Perce War by Scott M. Thompson
Ka-mi-akin: Last Hero of the Yakimas by Andrew Jackson Splawn
5 more
The Nez Perce Indians and the Opening of the Northwest (American Heritage Library) by Alvin M. Josephy Jr.
Indian legends of the Pacific Northwest by Ella E. Clark
Bridging a great divide : the battle for the Columbia River Gorge by Kathie Durbin
Great river of the West : essays on the Columbia River by William L. Lang
The Natural History of Puget Sound Country by Arthur R. Kruckeberg
Fewer