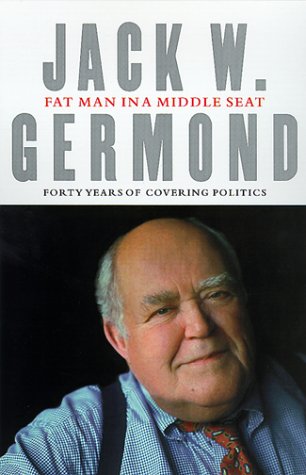 "For over four decades, reporter Jack W. Germond has made national politics his beat. In this memoir he serves up his inimitable views on politicians and elections across the country and recounts the daily trials of being a political reporter on the road - including often returning home on a late-Friday-night standby flight, a fat man in a middle seat."--BOOK JACKET. "Germond vividly recalls the races and personalities of the past forty years in politics: the great New York governors Averell Harriman and Nelson Rockefeller; the ever-present Richard Nixon; and Hubert Humphrey, Robert Kennedy, Eugene McCarthy, George McGovern, Jimmy Carter, Ronald Reagan, and Bill Clinton. He writes about the politics of race relations and how George Wallace "wrote the book on playing the race card." He discusses Watergate and what a nightmare it was for other reporters that two "unknown punks" had all the sources locked up. Germond is fascinating on the subject of reporting, notably on ethics and graft, and on the colleagues and bosses who didn't think he looked the part of a bureau chief. He writes about countless late nights in bars, rides on campaign planes, and off-the-record briefings and strategy sessions - the real stuff of politics."--BOOK JACKET.… (more)

Boiling Point: Democrats, Republicans, and the Decline of Middle-Class Prosperity by Kevin P. Phillips
Staying tuned : a life in journalism by Daniel Schorr
Time Present, Time Past: A Memoir by Bill Bradley
Taking on the world : Joseph and Stewart Alsop, guardians of the American century by Robert W. Merry
Kennedy & Nixon : the rivalry that shaped postwar America by Christopher Matthews
6 more
Trail Fever: Spin Doctors, Rented Strangers, Thumb Wrestlers, Toe Suckers, Grizzly Bears, and Other Creatures on the Road to the White House by Michael Lewis
Chienne de guerre : a woman reporter behind the lines of the War in Chechnya by Anne Nivat
The Choice: How Bill Clinton Won by Bob Woodward
Means of ascent by Robert A. Caro
President Kennedy profile of power by Richard Reeves
The Chief: The Life of William Randolph Hearst by David Nasaw
Fewer