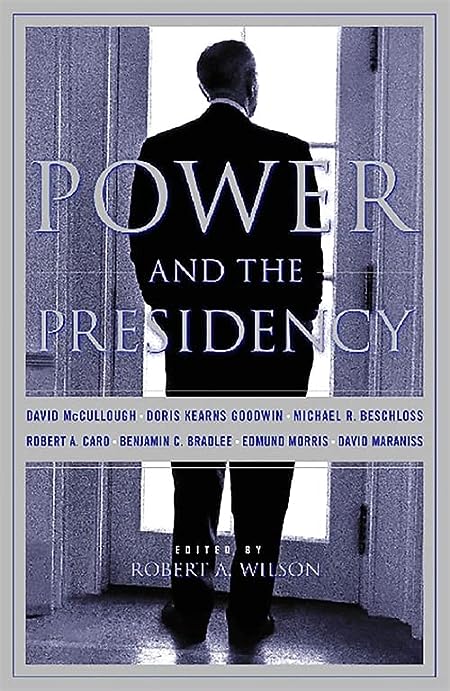 Power and the presidency

by Robert A. Wilson

This sterling collection of original, never-before-published essays on six fascinating contemporary presidents by some of the leading presidential biographers of our time is must reading for anyone interested in American politics, the history of the American presidency, or the lives of the presidents. Each essay--extending and elaborating on lectures originally delivered as part of the Montgomery Lecture Series at Dartmouth University--explores how a particular president came to power, wielded power, and was changed by power, and how each presidency affected the power of the office itself. The presidencies addressed are those of Roosevelt, Eisenhower, Kennedy, Johnson, Reagan, and Clinton. Published as our nation begins the process of electing the 43rd president, during a time when some believe the independence of the office itself is at stake, Power and the Presidency is a timely and thought-provoking look at the nature of power in American democracy.… (more)

The Last Best Hope of Earth: Abraham Lincoln and the Promise of America by Mark E. Neely Jr.
Governor Reagan: His Rise to Power by Lou Cannon
Taking charge : the Johnson White House tapes, 1963-1964 by Michael R. Beschloss
Abuse of power : the new Nixon tapes by Stanley I. Kutler
Dutch : a memoir of Ronald Reagan by Edmund Morris
8 more
Lincoln : Speeches and Writings : 1859-1865 (Library of America) by Abraham Lincoln
The years of Lyndon Johnson. [Volume 3], Master of the senate by Robert A. Caro
Eisenhower : the White House years by Jim Newton
"To the best of my ability" : the American presidents by James M. McPherson
President Reagan: The Role of a Lifetime by Lou Cannon
The Rise of Theodore Roosevelt by Edmund Morris
Theodore Rex by Edmund Morris
Ike : an American hero by Michael Korda
Fewer