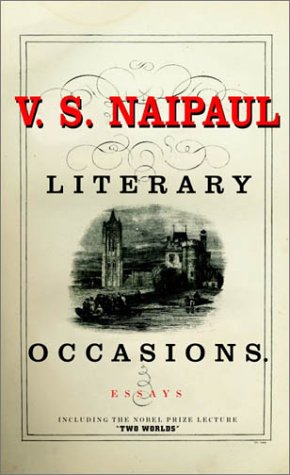 "In these eleven pieces - brought together for the first time - Naipaul charts more than half a century of personal inquiry into the mysteries of written expression and of fiction in particular. Here are his boyhood experiences of reading books and his first youthful efforts at writing them; the early glimmers and the evolution of ideas about the proper relation of particular literary forms to particular cultures and identities. Here, too, is Naipaul's famous comment on his putative literary forebear Conrad, and a less familiar but no less intriguing preface to the only book Naipaul's father ever published. Finally, in his celebrated Nobel Lecture, "Two Worlds," Naipaul reflects on the full scope of his career, rounding off the volume as an intellectual autobiography. Sustained by extraordinary powers of expression and thought, Literary Occasions is a stirring contribution to the fading art of the critic, and a revelation as well of a life in letters, in its many exemplary instances."--BOOK JACKET.… (more)

LibraryThing member Fledgist
Naipaul is as fine an essayist as he is a novelist.
2 more
LibraryThing member Cecilturtle
This series of essays was somewhat disappointing. Since many were written at various occasions, they are either very repetitive or, taken out of context, somewhat unsatisfactory. There are however nuggets of wisdom. I particularly enjoyed Naipaul's take on identity, the evolution of the novel and the need to redefine literature in a global context.… (more)
LibraryThing member James.Igoe
From what I have read about him, Naipaul is a harsh person, so I approached this cautiously, but I found his prose thoroughly enjoyable, although I have currently shelved his fiction writing. I was interested in his perceptions as an outsider, an Indian immigrant in Trinidad, and then later as an immigrant to England on scholarship. In this I was completely gratified, as I felt it worked the empathy muscles extensively, expressed in clear prose.… (more)
Fewer