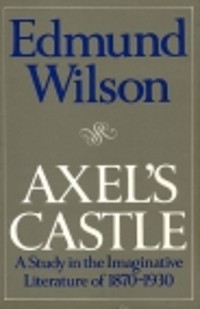 Published in 1931,Axel's Castle was Edmund Wilson's first book of literary criticism--a landmark book that explores the evolution of the French Symbolist movement and considers its influence on six major twentieth-century writers: William Butler Yeats, Paul Valéry, T. S. Eliot, Marcel Proust, James Joyce, and Gertrude Stein. As Alfred Kazin later wrote, "Wilson was an original, an extraordinary literary artist . . . He could turn any literary subject back into the personal drama it had been for the writer."

LibraryThing member tzelman
Sharp analytical discussion of Symbolists and imaginative prose 1870-1930--opinionated and perceptive
3 more
LibraryThing member RussellBittner
I am, virtually without qualification, a huge fan of Edmund Wilson’s essays, if less so of his fiction. While perhaps not at the level of a Macaulay, a Montaigne, a Johnson, a Benjamin, an Emerson, or even an H. L. Mencken, Wilson has written both eloquently and persuasively on a variety of topics. The Triple Thinkers and To the Finland Station come immediately and memorably to mind, even though I read both some thirty years ago.

I can’t express anything like the same kudos for Axel’s Castle. Wilson covers the gamut of interesting personalities and writers (Yeats; Valéry; Eliot; Proust; Joyce; Stein; and Rimbaud – not to mention the Symbolist Movement in general) – but either I lack the necessary enthusiasm for this Movement and these writers or Wilson has simply failed to convince me they’re worth reading.

God knows, Proust and Joyce both have their share of devotees. I’m just not among them. I’ve never read Proust. Joyce certainly proved his writer’s credentials with both Portrait of the Artist as a Young Man and Dubliners.v But I struggled to complete seventy pages of Ulysses before giving up in utter frustration. I’ve never even attempted Finnegans Wake.

And yes, I’ve read much of the poetry of Yeats and T. S. Eliot and found some of it inspiring. But would I feel the same degree of enthusiasm either for Gertrude Stein or for Paul Valéry? I doubt it. Rimbaud, of course, is in a category unto himself.

For the student of the Symbolist Movement, I suspect Axel’s Castle is a worthwhile undertaking. For the dilettante — which I admittedly am — I would suggest it’s not.

RRB
04/17/11
Brooklyn, NY, USA
… (more)
LibraryThing member jonfaith
Somewhere in the previous Wilson I recently read, the critic states that one of his favorite times in life is when he's able to describe a book to someone unfamiliar with such. That ripple of joy is on display here. Often. I truly wish I had read this book 30 years ago. It was probably the number of poets within which discouraged me at that time. Those childish things. A shrinking violet--in flannel. But a flaneur, nonetheless.

Wilson cites the advent of Symbolism as the movement which brought to the fore Joyce, Proust and Stein. The critic then develops a thesis of Romanticism being a response to Classicism. Naturalism then became a conservative easing of the Romantic fire which then led to the insular quest of Symbolism, crafted in a lab by the wonky Mallarmé and other, lesser, lights of contention. I find it odd that Valéry received a chapter but Huysmans did not. The effect of the Great War also appears nebulous in this reasoning.

There was much to learn in this ostensible primer. There was also a great deal of plot description. Some would wager an excessive amount. We can't deny Bunny his pleasure. My personal ax on Axel: not enough Freud and Faulkner.… (more)
LibraryThing member jwhenderson
Axel's Castle: A Study in the Imaginative Literature of 1870-1930 is a 1931 book of literary criticism by Edmund Wilson on the Symbolist movement in literature. It includes a brief overview of the movement's origins and chapters on W. B. Yeats, Paul Valéry, T. S. Eliot, Marcel Proust, James Joyce, and Gertrude Stein. The book's title refers to Axël, a prose poem by Auguste Villiers de l'Isle-Adam which is discussed along with the works of Arthur Rimbaud in the concluding chapter. Axel's Castle, truly should be considered one of the formative critical texts of American literary criticism.… (more)
Fewer