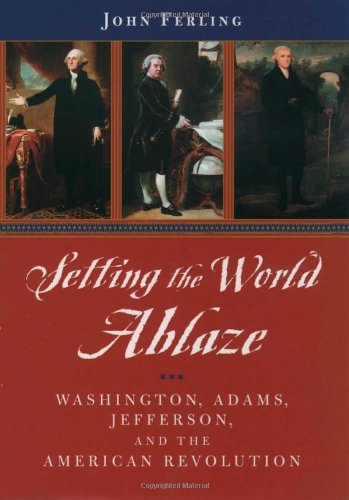 Setting the World Ablaze is the story of the American Revolution and of the three Founders who played crucial roles in winning the War of Independence and creating a new nation: George Washington, John Adams, and Thomas Jefferson. Braiding three strands into one rich narrative, John Ferlingbrings these American icons down from their pedestals to show them as men of flesh and blood, and in doing so gives us a new understanding of the passion and uncertainty of the struggle to form a new nation. A leading historian of the Revolutionary era, Ferling draws upon an unsurpassed command of the primary sources and a talent for swiftly moving narrative to give us intimate views of each of these men. He shows us both the overarching historical picture of the era and a gripping sense of howthese men encountered the challenges that faced them. We see Washington, containing a profound anger at British injustice within an austere demeanor; Adams, far from home, struggling with severe illness and French duplicity in his crucial negotiations in Paris; and Jefferson, distracted andindecisive, confronting uncertainties about his future in politics. John Adams, in particular, emerges from the narrative as the most under-appreciated hero of the Revolution, while Jefferson is revealed as the most overrated, yet most eloquent, of the Founders. Setting the World Ablaze shows indramatic detail how these conservative men--successful members of the colonial elite--were transformed into radical revolutionaries.… (more)

LibraryThing member jpsnow
This work alone provided more breadth and depth than everything I learned during school. The comparative approach is useful, and Ferling seems to bring out the personalities without editorializing. The triumvirate of Jefferson (the pen), Adams (the tongue), and Washington (the sword) were as involved in the revolution as anyone. And yet Ferling shows that they were initially driven as much by themselves as by the idea of freedom.… (more)
1 more
LibraryThing member cameronsue
Fascinating book about the Big Three of the American Revolution: Washington, Jefferson, and Adams. The book chronicles what each man is doing at each point in the revolution. Very illuminating, and easy to read.
Fewer

American sphinx : the character of Thomas Jefferson by Joseph J. Ellis
American scripture : making the Declaration of Independence by Pauline Maier
To begin the world anew : The genius and ambiguities of the American founders by Bernard Bailyn
His Excellency: George Washington by Joseph J. Ellis
John Adams by David G. McCullough
4 more
American creation : triumphs and tragedies at the founding of the republic by Joseph J. Ellis
Washington : a life by Ron Chernow
Thomas Jefferson : The Art of Power by Jon Meacham
The first American : the life and times of Benjamin Franklin by H. W. Brands
Fewer