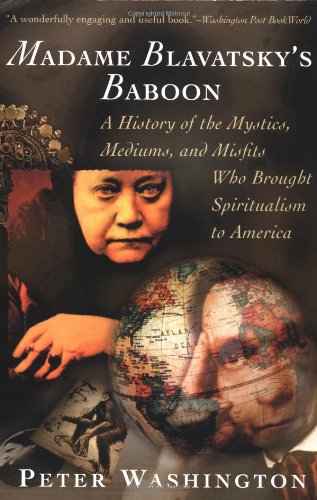 Madame Blavatsky's baboon : a history of the mystics, mediums, and misfits who brought spiritualism to America

"The New Age is not so new. Peter Washington traces it back to ideas that entered our cultural bloodstream just before the dawn of the twentieth century, when a mysterious renegade Russian aristocrat named Madame Blavatsky appeared in America. Darwin was wrong, she claimed. Man was not descended from apes but from spirit beings. As a reminder, she kept a stuffed baboon in her parlor dressed in wing collar, tail-coat, and spectacles, and holding a copy of The Origin of Species in its hand." "Theosophy, the movement Madame Blavatsky founded, spawned competing gurus and sects which in the course of the century evolved into the New Age. Here is the incredible story of Rudolf Steiner and his breakaway anthroposophy, of the tyrannical and mysterious Gurdjieff with his Path, of Ouspensky, the rebel Gurdjieffian, and of Krishnamurti - a future "world leader" spotted river-bathing in India as a boy by the pederast and grand panjandrum of Theosophy, Bishop (self-appointed, of his own church!) C. W. Ledbetter." "These gurus and the alternative religions they founded had a powerful appeal particularly for women, who found in them a role denied them by conventional religions. They also attracted some of the most influential intellects of the age - Oscar Wilde, W. B. Yeats, George Bernard Shaw, Frank Lloyd Wright, Katherine Mansfield, Aldous Huxley, and Christopher Isherwood - all searching for an alternative to Western materialism and notions of spirituality. Needless to say, these movements also attracted a host of colorful adventurers, uncertified lunatics, wealthy and lonely spinsters, charlatans, and lost souls."--BOOK JACKET.Title Summary field provided by Blackwell North America, Inc. All Rights Reserved… (more)

Library Journal | February 1995 | Vol. 120 No. 2 | p. 82
"In this well-documented, readable history of spiritualism, Washington describes the lives and careers of such prominent figures as Blavatsky, Annie Besant, Rudolph Steiner, Krishnamurti, Gurdjieff, Peter Ouspensky, and others. ..."
— 1 more
The New York Review of Books
As Washington's narrative reveals in fine detail, the dilemma that kept HPB continually off balance—how to advance sincerely held principles that had become entangled with improvised nonsense—was bequeathed to her associates when she died in 1891. Most of Madame Blavatsky's Baboon is given over to that largely farcical but sometimes poignant aftermath. Washington's masterly telling of the story is not just a chronicle but, implicitly, a parable about the progress of any religion from visionary zeal through the consolidating of a privileged and corruptible priesthood.

LibraryThing member Lenaphoenix
This book traces the origins of the modern New Age movement through examining the lives and philosophies of its charismatic founders. Theosophy founder Madame Blavatsky was just the first of many who garnered spiritual street cred by claiming to be in contact with a secret brotherhood of ascended masters. Though there is ample evidence that Blavatsky was nothing more than a highly creative fakir, her attempt to build a new spirituality based on the common thread within all religions struck such a chord with the world-weary sophisticates of her day that she succeeded in founding an enormous spiritual legacy.

Washington spends a great deal of time in this book detailing the various infights, outfights, scandals and shenanigans that plagued this movement from its beginnings, and there is plenty of comedy to had in this history. My enjoyment of the book was tempered, however, by the fact that this spiritual soap opera has a cast of characters that is so vast, it’s sometimes hard to keep track of them all. What Washington’s extensive coverage of the various players and their very human failings makes clear, however, is that the history of charismatic individuals abusing their self-proclaimed spiritual power is a very long one.

Though Washington does discuss in broad terms the spiritual philosophies behind Theosophy, Anthroposophy, the Work of Gurdjieff and the teachings of J. Krishnamurti, those who are looking for an in-depth analysis of these systems will likely be disappointed. Those who are interested in reviewing a fascinating portrait of human nature as it relates to spirituality and the development of new religions, however, will be amply rewarded by the expansive, clear-eyed perspective Washington brings to a subject that is usually shrouded in hazy myth.… (more)