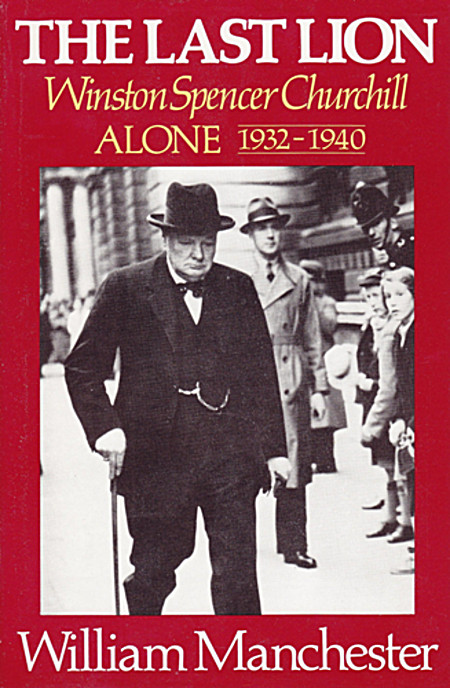 Manchester challenges the assumption that Churchill's finest hour was as a wartime leader. During the years 1932-1940, he was tested as few men are. Pursued by creditors-at one point he had to put up his home for sale-he remained solvent only by writing an extraordinary number of books and magazine articles. He was disowned by his own party, dismissed by the BBC, Fleet Street, and the social and political establishments as a warmonger, and twice nearly lost his seat in Parliament. Churchill stood almost alone against Nazi aggression and the British and French pusillanimous policy of appeasement.

LibraryThing member jdmays
An exceedingly long book that only the most ardent Winston Churchill fan will read from cover to cover. Well-written and interesting for a time. Unfortunately, it seems to cover every waking moment of the subject's life to 1940. Also, the edition I have - with the picture of Churchill as a youth - is one of the ugliest book covers I have ever seen.… (more)
9 more
LibraryThing member alwaysmlo
The first chapter in this book is without comparison. Really brilliant writing, and what a great subject for Manchester. Churchill gets my vote for man of the century.
LibraryThing member chellinsky
The Last Lion: Alone is remarkable in its depth, accessibility, and scholarship. Manchester spends nearly 700 pages developing not just the individual--Churchill--but also an extensive analysis of the people and events that shaped the man in the interwar period. The process that led to war is presented clearly and in vivid detail. There are few contemporary books that reach this level. No complaints.… (more)
LibraryThing member lunza
This biography cannot be praised highly enough. It is so detailed and yet so well written that it does not seem dense or difficult at all. The first volume covers the years up to 1932, when Churchill left the government and became a lone voice in the wilderness warning about the danger posed by Adolf Hitler. This volume covers the years of his exile, which ended in 1940 when he was unfortunately proven right about Hitler, and continues up to when he was named Prime Minister.

It is a shame that Manchester was not able to complete this work (which I guess would be at least two more volumes -- World War II and then his twilight years); I understand that someone else is going to, but it probably won't be the same.… (more)
LibraryThing member Doondeck
Only slightly less engrossing that the first volume. What a shame that we will never get to see the rest of Manchester's work.
LibraryThing member dirac
I enjoyed this book though there was just as much information not on Churchill as on him. This is not all bad as it was necessary to tell a complete story of the rise of Nazi Germany and the reactions of various governments to the aggressive regime therein located. A good read though dry at times. I am torn between 3 and 4 stars. I think I settled on 3 simply because I stopped the book a few times just to get a break. The book was well written and does provide a spectacular view of the time.… (more)
LibraryThing member Schmerguls
This second volume of Manchester's superb biography covers the years Churchill was out ot the Government and the time in 1939 and 1940 before he became Prime Minister. It is splendidly written and one stands in dismay to read how dangerous and short-sighted the men opposing Churchill were and how right Churchill was in calling attention to the folly of Baldwin and Chamberlain and those who supported them, The years covered by this book are doleful and can only be borne because one knows that all comes right in the end. While I lived through 1938 and1939 and 1940 with acute attention to th events of those years, I was surprised how much I did not know. This book is awesomely engrossing and tells the sad story of those years brilliantly… (more)
LibraryThing member storm1950
After reading a brief introduction to earlier works on Churchill by the author, I purchased this and enjoyed it very much. Great insite into the mindset of the politicians of the day and the history of post WW1 and preWW2.
LibraryThing member mattries37315
An eloquent voicing crying out in the wilderness a warning of war and dismissed until vindicated when that war begins, the nation and the world towards him as the last shining hope of the war. The Last Lion: Winston Spencer Churchill: Alone, 1932-1940 is the second volume of William Manchester’s biographical trilogy which deals with Churchill’s life during his political “wilderness” years as Europe slid towards war.

From the outset Manchester indicates that a biography is not just about a person, but also the times that individual lived in. It was a subtle hint that the “wilderness” years of Winston Spencer-Churchill’s political life wouldn’t follow one man be an examination about how the 1930s saw the rise of darkness on the continent and the willingness of the British upper class to do everything possible to acquiesce with it in the name of never going to war again. With the rise of Adolf Hitler in 1933, Churchill found his nemesis and began signaling the danger to the British Empire and the peace of Europe to an empty House of Commons for years while challenging the government on preparedness of the armed forces in comparison to Germany, only to be lied to in response and knowing it due to his “spy network” amongst the civil servants and military officers that saw the dangers of the Nazi. During these years, Churchill would write columns and articles in various British media and around the world warning the dangers of the Nazis only to be labeled a warmonger until Hitler set his eyes on territorial expansion and many around the continent looked to him to plead for them in front of the British public while the Nazis would always attack him in their propaganda newspapers and complain to the appeaser British ambassador. In 1936 it seemed that Churchill’s call to action had caught the national mood when suddenly his support of Edward VIII as a person if not his decisions made him the scapegoat to the national anger of the constitutional crisis by the King’s desire to marry Wallis Simpson, thus with the public angry at Churchill the national leadership dismissed his calls for action even as Hitler moved his eyes towards Austria and Czechoslovakia. With the rise of Neville Chamberlain as Prime Minister the enabling of Hitler through appeasement and undermining of their alliance with France while discouraging the German military from overthrowing Hitler which would have precluded the start of another war. Once war seemed inevitable as 1939 continued, Churchill’s outsider status for the previous decade and call for preparedness had the public calling for him to in the cabinet something Chamberlain didn’t want to do until he finally had to form a War Cabinet after declaring war. Once again First Lord of the Admiralty, Churchill literally led the British war effort as it was the Royal Navy was instantly was fighting the Germans not the Army or Air Force until the Norway and the invasion of the Low Countries in 1940 at which time the Conservative backbenchers and Labour forced Chamberlain to surrender his office and nominating Churchill to George VI.

Covering eight years of a person’s life would not normally take almost 700 pages, but as Manchester implied at the beginning of this book this is more a history of the times almost as much as it was a biography. Though Churchill is the focus throughout, the lives and actions of Stanley Baldwin, Neville Chamberlain, Adolf Hitler, and many others are covered especially in their reactions to and from Churchill. Manchester’s bias against “the Men of Munich” is overwhelmingly apparent though as an individual who fought in the war—admittedly in the Pacific—it shouldn’t surprise the reader that a veteran would not shine a good light on someone who kowtowed to Hitler’s wishes instead of having a spine. The political drama surrounding Chamberlain’s loss of support in the House and the rise of Churchill even in the shadow of the German invasion of the Low Countries is literally the best part of the book even though the reader knows the outcomes, how the two were both independent of one another though both played off one another.

Alone, 1932-1940 portrays the low ebb of Winston Churchill’s political and real life as all his eloquence falls not on deaf years but those who simply do not care until it is too late. William Manchester not only follows Churchill’s life during these eight years, but also the nation and the world he was living in and those in power that allowed Europe to go to war twenty years after the last one. Today we think it was inevitable that Churchill would rise to become Prime Minister, but to even Churchill during these years it wasn’t and this book explains why.… (more)
LibraryThing member stringsn88keys
Remarkable telling of Winston Churchill's wilderness years.
Fewer