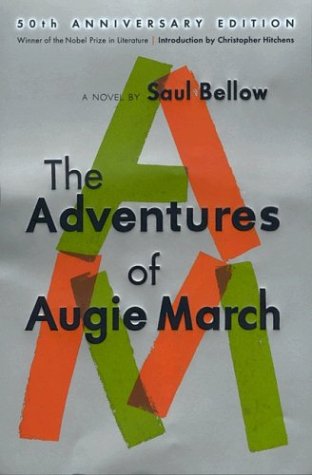 The adventures of Augie March

This grand-scale heroic comedy tells the story of the exuberant young Augie, a poor Chicago boy growing up during the Depression. While his neighborhood friends all settle down into their various chosen professions, Augie, as particular as an aristocrat, demands a special destiny. He latches on to a wild succession of occupations, proudly rejecting each one as too limiting. It is not until he tangles with a glamorous perfectionist named Thea, a huntress with a trained eagle, that his independence is seriously threatened. Luckily, his nature, like the eagle's, breaks down under the strain. He goes on to recruit himself to even more outlandish projects, but always ducks out in time to continue improvising his unconventional career.

National Book Foundation
The Adventures of Augie March is for me the great creation myth of twentieth century American literature.

I made it 100 pages in and decided that was enough.
LibraryThing member AlCracka
1953. Martin Amis says this is the Great American Novel, probably just to be an asshole. Stacie and S. are not impressed.
LibraryThing member HadriantheBlind
A bit of a disappointment compared to his other books, which were undoubtedly excellent. This one has gone seems to have gone nowhere - or at least well over my head. I might try it again later, and hopefully I won't become crushingly bored within 100 pages.
LibraryThing member auntieknickers
I've only read two books by Bellow, arguably one of the great American authors of the twentieth century. (The first was Herzog, which I read 50 years ago. I have no memory of it, and I suspect that at 16 I did not have the experience to appreciate it.) Augie March, written about 15 years earlier than Herzog, is a fascinating, but often exasperating, novel. My-husband-the-English-major, who listened to it a bit earlier, opined it was a Bildungsroman, but I saw precious little Bildung happening during Augie's Adventures. I would agree with some other Goodreads reviewers that it was more a picaresque novel -- that is, one damned thing after another. Various friends and family members tell Augie that he just lets things happen to him and will follow anyone who flatters him, and I'd agree with them, too.

Although there are major segments set in Mexico and afloat in the Atlantic, the majority of the novel is set in Chicago from the 1920s to the late 1940s. There's plenty of atmosphere, and Bellow has a good memory for the slang of the period. (At least, I assume so, as Bellow came up in this time and place.)

Others have reviewed this book better than I (Steve Sckenda here on Goodreads, for one) but I would like to mention some thoughts I had while listening.

I wish I had a dollar for every adjective Bellow used -- he loved to string them together, especially when describing people's physical appearances. He also seemed a bit fixated on handicaps and imperfections. Not only the obvious major characters -- Georgie, his developmentally-disabled brother; his weak-eyed and eventually blind mother; Einhorn, the near-quadriplegic employer -- have their handicaps pointed out. He points out the physical imperfections, great and small, of many characters. Only Augie and his girlfriends seem exempt -- and even Augie gets two teeth broken in a fight in Mexico and mentions the broken teeth several times afterwards.

Some other twentieth/twenty-first century writers -- John Updike and Richard Ford come to mind -- have revisited the same character multiple times. I almost wish Bellow had written a "Further Adventures of Augie March." He is a character almost too self-aware, but it doesn't seem to get him anywhere, and when the book ends, he is barely even 30 if I read it right. What would Augie become in 10, 20 or 30 years? Sadly, we'll never know (although he may appear in other books under other names?) Although this wasn't my favorite book of all time, I would still recommend it, and if you like audiobooks, the narrator, Tom Parker, does a great job with this one.… (more)
LibraryThing member novelcommentary
Suffice it to say I can see why this is such a classic. The first person narrative by the book's title character tells the tale of a poor Chicago born Jewish kid who seems to be a natural attraction for other people's schemes. He is smart and good looking and as we listen to his story we realize Augie is always getting advice, from the Russian boarder, Mrs. Lausch to then being adopted, almost literally once, by a series of mentors who all thought Augie would be great for their plan. His jobs are listed here for a reference. He becomes a handbill-distributor, a paperboy, a Woolworth’s stocker, a newsstand clerk, a trinket-seller, a Christmas helper at a department store, a flower delivery boy, a butler, a clerk at fine department stores, a paint salesman, a dog groomer, a book thief, a coal yard worker, a housing inspector, a union organizer, an eagle-trainer, a gambler, a literary researcher, a business machine salesman, a merchant marine, and ultimately an importer-exporter working in wartime Europe. Throughout these endeavors, there are also wonderfully drawn characters who try to give Augie direction on how to get ahead. His brother Simon marries into money and can't understand why Augie doesn't follow in his lead. There are also the women in his life that he falls for, Thea who takes him on a wild Eagle training adventure to Mexico and Stella, the girl he meets there and eventually marries. The writing is complex, filled with allusions to Greek and Roman gods, various figures are compared to universally know references, but it is wonderfully constructed. An example below details Augie and his friends riding in the elevator cars of the luxury hotels:

"In the cage we rose and dropped, rubbing elbows with bigshots and operators, commissioners, grabbers, heelers, tipsters, hoodlums, wolves, fixers, plaintiffs, flatfeet, men in Western hats and women in lizard shoes and fur coats, hothouse and arctic drafts mixed up, brute things and airs of sex, evidence of heavy feeding and systematic shaving, of calculations, grief, not-caring, and hopes of tremendous millions in concrete to be poured or whole Mississippis of bootleg whiskey and beer.” Such sentences occur on almost every page. They are like hall closets; you open them and everything falls out. "

That's true of this book, when you open it up, everything falls out, but going through the trouble to make sense of the contents is very satisfying.

I will include here some lines from a New Yorker essay on Saul Bellow intentions regarding the novel:

"Then, as he recalled, he experienced an epiphany: “I had a room in Paris where I was working, and one day as I was going there after breakfast, a bright spring morning, I saw water trickling down the street and sparkling.” The shining stream, he said, suggested to him the form of a new novel. Perhaps so, but a few other circumstances should be taken into account. This was the time, the postwar years, when American art came into its home country. Not just Bellow but many others walked out from under the shadow of the European masters and invented new, personal styles. Bellow was part of a Zeitgeist, and the stay in Europe encouraged his enlistment. The more he hated France, the more he loved America, and wanted to make an art that was like America—big and fresh and loud.

With this teeming book Bellow returned a Dickensian richness to the American novel. As he makes his way to a full brimming consciousness of himself, Augie careens through numberless occupations and countless mentors and exemplars, all the while enchanting us with the slapdash American music of his voice."… (more)
LibraryThing member JVioland
Good book, well written, entertaining. Unfortunately, not memorable.
Fewer