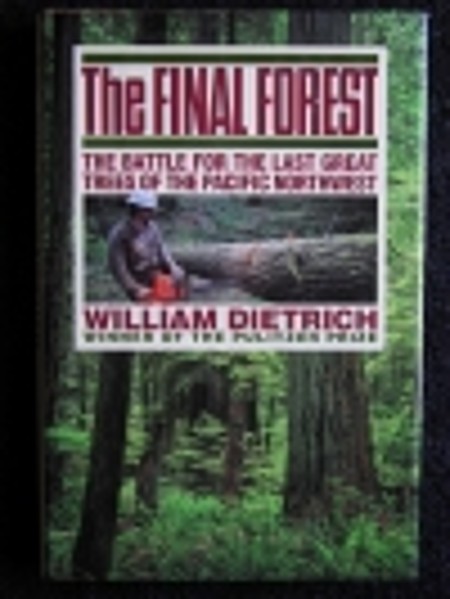 The final forest : the battle for the last great trees of the Pacific Northwest

2011 Outstanding Title, University Press Books for Public and Secondary School Libraries Winner of the Pacific Northwest Booksellers Association Award Before Forks, a small town on Washington?s Olympic Peninsula, became famous as the location for Stephenie Meyer?s Twilight book series, it was the self-proclaimed ?Logging Capital of the World? and ground zero in a regional conflict over the fate of old-growth forests. Since Pulitzer Prize?winning journalist William Dietrich first published The Final Forest in 1992, logging in Forks has given way to tourism, but even with its new fame, Forks is still a home to loggers and others who make their living from the surrounding forests. The new edition recounts how forest policy and practices have changed since the early 1990s and also tells us what has happened in Forks and where the actors who were so important to the timber wars are now. For more information on the author to to: http://williamdietrich.com/… (more)

The final forest : the battle for the last great trees of the Pacific Northwest by William Dietrich (Hardcover)

The Good Rain: Across Time and Terrain in the Pacific Northwest by Timothy Egan
Forest Dreams, Forest Nightmares : The paradox of old growth in the Inland West by Nancy Langston
The Olympic Rain Forest: An Ecological Web by Ruth Kirk
Northwest passage : the great Columbia River by William Dietrich
The untamed Olympics; the story of a peninsula by Ruby El Hult
20 more
Across the Olympic Mountains : The Press Expedition, 1889-90 by Robert L. Wood
Wintergreen: Listening to the Land's Heart by Robert Michael Pyle
Olympic battleground : the power politics of timber preservation by Carsten Lien
Ancient Forests : A celebration of North America's old growth wilderness by David Middleton
The Natural History of Puget Sound Country by Arthur R. Kruckeberg
The Organic Machine: The Remaking of the Columbia River by Richard White
The golden spruce : a true story of myth, madness, and greed by John Vaillant
Fire & ice : the Cascade volcanoes by Stephen L. Harris
Skid road : an informal portrait of Seattle by Murray Cromwell Morgan
Voyage of a summer sun : canoeing the Columbia River by Robin Cody
The Measure of a Mountain: Beauty and Terror on Mount Rainier by Bruce Barcott
Puget's Sound : a narrative of early Tacoma and the southern Sound by Murray Cromwell Morgan
The Collector : David Douglas and the Natural History of the Northwest by Jack Nisbet
Cadillac desert : the American West and its disappearing water by Marc Reisner
Landscapes of promise : the Oregon story, 1800-1940 by William G. Robbins
Plants of the Pacific Northwest Coast : Washington, Oregon, British Columbia & Alaska by Jim Pojar
Clearcut : the tragedy of industrial forestry by Bill Devall
A river lost : the life and death of the Columbia by Blaine Harden
Ethnobotany of western Washington : the knowledge and use of Indigenous plants by native Americans by Erna Gunther
The American Northwest: A History of Oregon and Washington by Gordon B. Dodds
Fewer