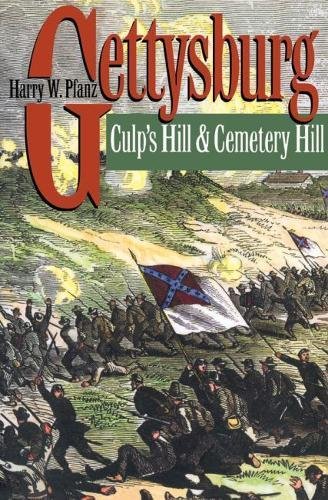 In this companion to his celebrated earlier book, Gettysburg--The Second Day, Harry Pfanz provides the first definitive account of the fighting between the Army of the Potomac and Robert E. Lee's Army of Northern Virginia at Cemetery Hill and Culp's Hill--two of the most critical engagements fought at Gettysburg on 2 and 3 July 1863. Pfanz provides detailed tactical accounts of each stage of the contest and explores the interactions between--and decisions made by--generals on both sides. In particular, he illuminates Confederate lieutenant general Richard S. Ewell's controversial decision not to attack Cemetery Hill after the initial southern victory on 1 July. Pfanz also explores other salient features of the fighting, including the Confederate occupation of the town of Gettysburg, the skirmishing in the south end of town and in front of the hills, the use of breastworks on Culp's Hill, and the small but decisive fight between Union cavalry and the Stonewall Brigade.… (more)

LibraryThing member Joycepa
In this third book of his trilogy on the Battle of Gettysburg, Pfanz focuses on a very little-recognized aspect of the engagement--the fight for Culp’s Hill and Cemetery Hill on the northern part of the battlefield July 2-3. Thanks to Killer Angels and the movie “Gettysburg”, Longstreet, Chamberlain, Pickett and others who participated in the fighting for the south and center part of the Union line are practically household names and rightly so. But hardly anyone recognizes the names of Oliver Howard and Richard Ewell as a result.

Yet there was quite a vicious fight on both days for control of what was, really, the keystone to the Union line--Cemetery Hill and its immediate neighbor on the ridge, Culp’s Hill. Confederate losses in particular were extremely heavy as General Johnson ordered his units to attack what were impregnable breastworks on Cemetery Hill. The Confederates occupied a portion of Culp’s Hill for a while but were eventually driven off.

If that were all the book covered--the fighting on those two days--it would be interesting enough. But from the beginning Pfanz makes the account a page-turner, by focusing on the two commanders involved--Confederate Richard Ewell and Union Oliver Howard, and by recapping the fighting on July 1st that affected the Union positions on the two critical hills. He also answers a question that has been raised many times--why did Ewell, on July 1, not occupy Cemetery Hill immediately?

For those who read the book or saw the movie, which very dramatically depicted the conversation, there is a scene between Isaac Trimble and Robert Lee, where Trimble rants on about Ewell’s failure to take the hill. He makes it clear that Ewelll was paralyzed or something and didn’t act when he should have. It is particularly well-acted in the movie, and we are left in no doubt that Ewell was the cause of the Confederate failure to follow up their victory of July 1.

Pfanz discusses the reorganization of Lee’s army just prior to the Gettysburg campaign and shows that Ewell--who was taking over Stonewall Jackson’s old 2nd Corps--had never served directly under Lee before, but only under Jackson, who was a very, very different commander. One problem, then, was that given the loosey-goosey way Lee gave orders--very different from Jackson who gave precise orders and had the habit of putting under arrest anyone who didn’t follow them the way he thought they should have-- Ewell really wasn’t sure what he was supposed to do. Also, Ewell himself had reconnoitered Cemetery Hill--and knew that the Union had already occupied it; the Iron Brigade was there. Granted, there weren’t a great many troops there, but what no one talks about is the nature of that particular point on the Union defense line--the steep slope, rocks and wooded nature of the hill that made an attack, especially at nightfall, practically impossible given defenders. It gives the lie to Porter Alexander who was critical of Lee’s decision, on July 2, of attacking Cemetery Ridge and not the Hill. Alexander, who had a limitless supply of self-confidence if not downright arrogance, admitted that he had not seen the area of Cemetery Hill, but still felt omniscient enough to criticize Lee--who had seen it. One always has to be careful with memoirs, especially those of the losers. Trimble, for example, was an ambitious trouble-maker who was quite self-serving in his accounts after the war of what happened at Gettysburg.

I found this the most readable, the most followable of Pfanz’s three books, if for no other reason than the maps were excellent! Which can not be said of the other two. Also, the extensive notes to each chapter were well worth reading. As usual, Pfanz includes excerpts from letters, diaries and memoirs of everyone from the lowliest private in either army to the highest-ranking generals. This not only makes the book more interesting from a personal perspective (and also shows how no two soldiers saw the fighting the same way) but also provides a bibliography for further reading in terms of these personal reminiscences.

While this book can be read on its own, it’s still better to read the other two (Gettysburg, the First Day and Gettysburg, the Second Day with a good set of maps, such as Gottlieb’s The Maps of Gettysburg at hand. The first two books are worth the extra effort, and will make the third that much more of a pleasure to read.

Possibly the most important area of fighting on July 2nd and 3rd, Cemetery Hill and Culp's Hill are little known to the average person. There was no dramatic charge or movie worthy desperation on the defenders part. Yet, the fighting was critical in holding the right on the Union line and Confederate charges cost the Rebels dear. There was also extensive in-town fighting and nighttime fighting, situations not commonly seen in Civil War battles.

This title was a library discard for me, so I wasn't able to read Pfanz's other accounts of the battle. I thought this portion of the series was well written and relatively easy to follow along with. As with most battlefield accounts, I wish there were more maps and I did find some of the writing a little disjointed. The photos and personal stories of soldiers who participated in these battles were great though. The little vignettes really made some of the men come alive and helped me to better understand some of their decision making.

Overall, I recommend this title to those who have a strong interest in the battle of Gettysburg and want to know a little more about events not commonly talked about.… (more)
Fewer