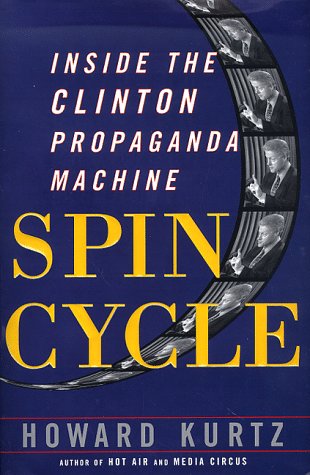 Bill Clinton is the most investigated president since Richard Nixon--facing inquiries into Whitewater, campaign fundraising abuses, and sexual misconduct--and yet he improbably began 1998 with approval ratings as high as those of Ronald Reagan. But the new year has brought a barrage of new allegations, and the president and his advisers face once again the challenge of spinning the news to their advantage, a challenge they have mastered many times before.In "Spin Cycle," award-winning "Washington Post" reporter Howard Kurtz reveals the inside workings of Clinton's well-oiled propaganda machine--arguably the most successful team of White House spin doctors in history. He takes the reader into closed-door meetings where Bill Clinton, Al Gore, Mike McCurry, Lanny Davis, and other top officials plot strategy to beat back the scandals and neutralize a hostile press corps through stonewalling, stage managing, and outright intimidation. He depicts a White House obsessed with spin and pulls back the curtain on events and tactics that the administration would prefer to keep hidden, including: The secret report that Hillary Clinton ordered o… (more)

Behind the Oval Office : winning the presidency in the nineties by Dick Morris
The Choice: How Bill Clinton Won by Bob Woodward
Shadow : five presidents and the legacy of Watergate by Bob Woodward
President Kennedy profile of power by Richard Reeves