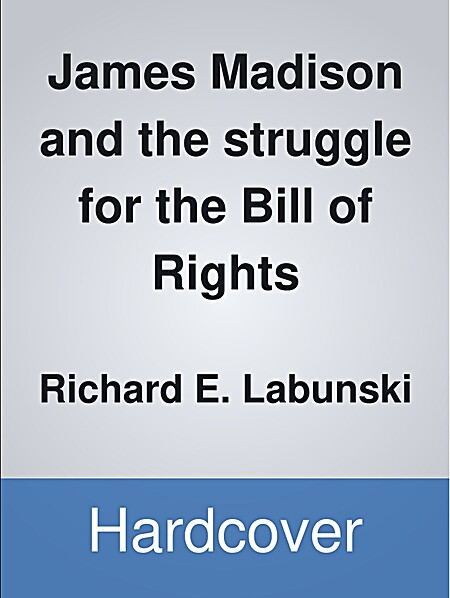 James Madison and the struggle for the Bill of Rights

The Constitution is so exalted that many Americans fail to realize it was just barely approved as the supreme law of the land. In Virginia, the most influential state at the time, the debate over ratification developed into a titanic struggle between political heavyweights James Madison and Patrick Henry. Even after Madison promised to add a Bill of Rights to mollify anti-Federalists, Henry fought his rival bitterly, ensuring that Madison's political path was strewn with obstacles.

First of all, I do want to say that author Richard Labunski did a fine job detailing the trials and travails of the road to the first Congress travelled by James Madison, one of our most indispensable Founders. Labunski reminds us that history was, while in the making, not nearly as foregone as it seems this far removed. Madison could have lost his election to the First session of the House of Representatives after the new government was formed causing the Constitution to perhaps lose the addition of the Bill of Rights and that would have been calamitous, indeed.

I enjoyed the story of Madison's road as told by Labunski. Madison has been one of those founders who's position as a great Founder has been rocky. Up one decade and down another. Sometimes he has been considered a far lesser light than he deserves to be considered. Currently, he seems to be up which is fortunate. I think he should remain there. He is by far one of the most brilliant Founders we had and it is good that Labunski treats Madison with the respect he deserves.

Here is where I feel the book was lacking, though. Why was the Bill of Rights so important? What were the philosophies, the influences, the reasons the amendments were fought over? Labunski does not take much time to delve further under the surface to ferret out those reasons. He briefly mentions things here and there as the book moves along those lines, but I think his book would have been more complete with a bit more of it.

I found myself wondering what all the fuss was over far too much while reading the book and feel Labunski shorted the reader a fuller explanation.

Still, I give the book a pretty good rating. It is a good tale that is not often told (which is why I think he should have gone deeper, by the way).

It come recommended by me, anyway.… (more)
LibraryThing member buffalogr
A hard slog...page by page. Couldn't finish
LibraryThing member wildbill
The book is about a topic I find very interesting. It provides a detailed exposition of the enactment of the Bill of Rights. Patrick Henry was a strong opponent of the Constitution and the Bill of Rights and I learned a great deal about him in this book. I would recommend the book to anyone interested in this important event.… (more)
LibraryThing member gmillar
I found listening to this book so difficult that I stopped after the second disc. I hope to grow up a bit and get back to it one day in order to finish it because it's stated intent is so important to understanding USA. I was also hoping for a more intimate look into Madison but, as far as I went, I didn't find it. Again, I may not have been paying enough attention. Either way, the writing (or the reading) wasn't of the type to grab me quickly enough.… (more)
Fewer

American creation : triumphs and tragedies at the founding of the republic by Joseph J. Ellis
American scripture : making the Declaration of Independence by Pauline Maier
What kind of nation : Thomas Jefferson, John Marshall, and the epic struggle to create a United States by James F. Simon
His Excellency: George Washington by Joseph J. Ellis
Washington's crossing by David Hackett Fischer
1 more
Lincoln and Douglas: The Debates That Defined America by Allen C. Guelzo
Fewer