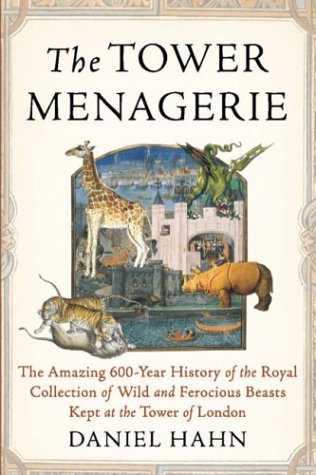 The Tower menagerie : the amazing 600-year history of the royal collection of wild and ferocious beasts kept at the Tower of London

An entertaining and enlightening history of Britain's first zoo: the Tower of London menagerie. When King Henry III was given three leopards by his new brother-in-law, Frederick, the Holy Roman Emperor, he ordered -- in desperation -- that they be sent to the Tower of London, his great fortress by the bank of the Thames. After all, where does one keep such things? Soon after the leopards' arrival in 1235 they were joined by an even greater wonder, a huge Norwegian polar bear which was encouraged to catch its own food from the river to save on upkeep expenses. And over the next 600 years -- until the menagerie was closed down by Wellington in 1835, a few years before it became clear he had an interest in the soon-to-open London Zoo -- the Tower played host to thousands more exotic creatures, all brought from overseas by returning explorers or VIP guests. Daniel Hahn's charming history of the first zoo explores the uses and abuses of the menagerie and the legion of Great and Good who came to behold its wonders, from William Blake, who came to look at the 'tygers', to John Wesley, who played his flute to the Tower lions in an attempt to establish if they had souls. Fascinating and ins… (more)

As we know by now, I read a lot of older (1950s-1980s) pony books - so when I found a couple of more contemporary ones in a charity shop, I picked them up to have a try. This was quite traditional, in that there is a teenage girl, horses, and a plot working around difficulties and always centering around the horses and their relationship with the people. The setting was obviously a bit more contemporary, as well as American, with a merchant banker sister and her boyfriend, and there was some slightly odd horse-whispering type stuff, which I think was based on horse psychology but not entirely sure. But a readable and engaging book; I would read others in the series and recommend it to other pony book lovers, young and old.… (more)
2 more
LibraryThing member JBD1
A lighthearted history of the Tower Menagerie from its earliest days to its last stand, a period covering some six hundred years. Hahn's found some interesting sources and put them to good use, even if citing them better would have been entirely acceptable.

Since there's not a huge amount of material to work with, at least during the early period of the Menagerie, Hahn pads the narrative with research on other menagerie-type attractions in London and elsewhere, and he also considers the slow development of what we now know as animal rights.

Witty and amusing, and certainly worth a reading as a quick introduction to the subject.… (more)
LibraryThing member klai
Hahn's book is for the most part an enjoyable read, although as always with popular history works, I couldn't help feeling that the book was not entertaining (or well-written) enough for me not to miss having references, but also that it would have needed more flesh on the bones of the story to be enjoyable as a more academic tome. This is not to diss the book - I do recommend it, for it does deliver what it says on the cover: the story of the menagerie in the Tower of London.… (more)
Fewer

The Tower: The Tumultuous History of the Tower of London from 1078 by Derek A. Wilson
The Tudor age by Jasper Godwin Ridley
The Lisle Letters: An Abridgement by M. St. Clare Byrne