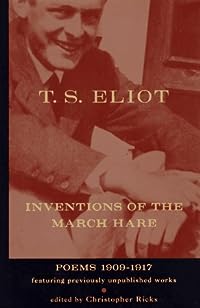 A few months before The Waste Land was published in 1922, T.S. Eliot gave the manuscript to his benefactor in New York, John Quinn. At the same time, he sold to Quinn a notebook containing about fifty poems that he had written during his twenties. It was not until 1968, three years after the poet's death, that the double cache was unveiled within the Berg Collection of the New York Public Library. The early poems, from the notebook and the accompanying leaves, are now at last published, all but a few of them for the first time. Of great interest, both technical and human, they reveal the young Eliot in the process of creating himself and his art: ruminating on the blind alleys and vacant lots of the city, exploring the perplexities of the modern age (doubt, ennui, indifference, dismay, affectation), and experimenting with a variety of poetic forms (urban pastoral, lyric, satire, the prose poem). Complementing the new poems, which include several bawdy verses, are "richly informative drafts" (The Observer, London) of many of Eliot's best-known poems, among them "The Love Song of J. Alfred Prufrock" (with a previously unpublished fragment), "Portrait of a Lady" (signally and subtly different from the published text), many versions of "Whispers of Immortality," and "Ode" (not reprinted since 1920).… (more)

LibraryThing member ValerieAndBooks
Almost all of the poems here are previously unpublished. Early T.S. Eliot was not fully developed (as would be expected of most early attempts by any acclaimed poet), and some works are actually kind of sophomoric. However, one can see Eliot grow and develop.

Focusing on the time period 1909-1917 -- 1917 was when Eliot was first published-- this collection is heavily annotated, footnoted, and appendixed with an occasional facsimile of his writings here and there. While meant to inform the reader, and certainly not extraneous, this additional material could also be very distracting. I would have preferred that all the poems were in one place, and everything else organized after; instead of wading through stuff to get to the next poem.

Recommended for fans (particularly of a scholarly bent) of T.S. Eliot, but I think that in the future when I'm in the mood to read him, I'll just reach for my "selected poems" edition.… (more)