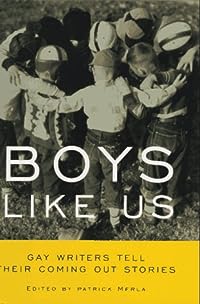 Boys like us : gay writers tell their coming out stories

"Boys Like Us presents the true "coming out" stories of a stellar line-up of gay writers, spanning two generations. Written specifically for this collection, these are powerful, often stunning evocations of the primal process by which men come to terms with their desire for other men." "Coming out is undeniably central to every gay man's life, but the phrase encompasses multiple meanings. Here are accounts of revealing one's sexual identity to parents, siblings, friends, and co-workers and, in one notable instance, to a stockbroker. Men tell of their first sexual encounters from their preteens to their thirties, with childhood friends who rejected or tenderly embraced them, with professors, with neighbors, with a Broadway star. One man writes of his marriage to a lesbian poet, another of leaving his wife for a male lover. Several selections reveal the autobiographical underpinnings of famous novels. These are intense, sometimes unexpectedly funny tales of romance and heartbreak, repression and liberation, rape and first love - defining moments." "Arranged chronologically from Manhattan in the late '40s to San Francisco in the early '90s, these personal essays ultimately form a documentary of changing social and sexual mores in the United States during the last half-century - a literary, biographical, sociological, and historical tour de force."--BOOK JACKET.Title Summary field provided by Blackwell North America, Inc. All Rights Reserved… (more)

LibraryThing member yorkjob
Given as a gift when I came out. This book sheds light on small but poignant stories that are rarely discussed.
1 more
LibraryThing member jwhenderson
What a storehouse of tales about boys coming out about their gay being. Being gay is an important aspect of every story in this book, yet it is not just the center of the being of each narrator it is their life. Each life, however, is different and it is that difference that makes this book so
Show More
interesting. In a certain way there are as many stories about being gay as their are individuals, yet each of us (and I include myself in that group) shares something with the other. That is what is explored in this wonderful and unique look at what it means to be gay and to live as a gay man and to come out.
Show Less
Fewer

Becoming a Man: Half a Life Story by Paul Monette
A Boy's Own Story by Edmund White