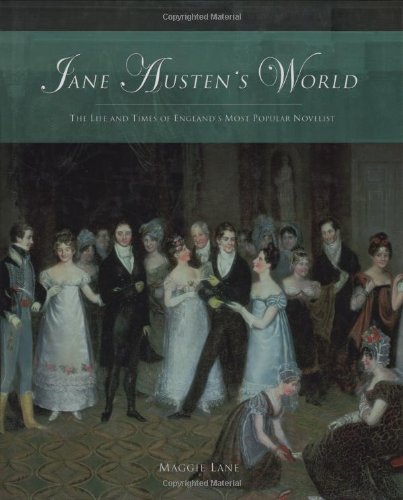 Jane Austen's world : the life and times of England's most popular novelist

It is a truth universally acknowledged that Jane Austen is one of the most popular novelists in the English language and her work is more popular today than ever before. The wit and romance of her writing captivate television and cinema audiences worldwide, while boosting the readership of the novels themselves. In an age when attention spans are low and fast, furious action drama overwhelms television and movie audiences, the sheer romance of Jane Austen adaptations has continued to prove itself at awards ceremonies. But who was Jane Austen and what sort of world did she inhabit? Maggie Lane, a respected Austen authority and a committee member of the Jane Austen Society, takes a look at the historical and social period in which Jane Austen was writing ? a time when England was developing into a colonial power, while George III sank into madness and the Regency took hold. Elsewhere, the French Revolution and the Napoleonic Wars raged and the New World was developing.… (more)

LibraryThing member vonze
review for Jane-in-Jane on the way :)
1 more
LibraryThing member wealhtheowwylfing
A crash-course in Jane Austen, particularly suitable for those who have some familiarity with the period and love the books. Lane summarizes the trends in food, fashion, architecture, vacationing, leisure activities, poetry, prose, and politics of Jane Austen's lifetime. She walks us through what is known about Austen's life, what the sources are, and the probable biases/blinders of those sources. I found it a valuable resource, very useful for clearing up misunderstandings or areas of ignorance on my part. My only criticisms are that I found it a bit truncated (I would have loved far more detail) and that there were rather too many photos from recent film adaptations of Austen's films.… (more)
Fewer