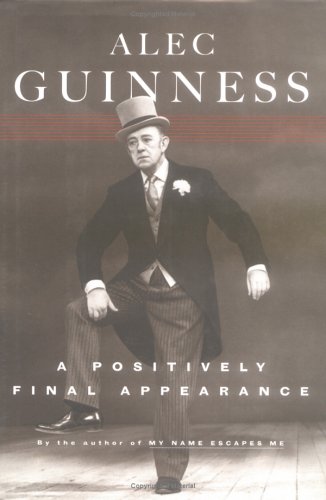 "My Name Escapes Me, the diaries of Sir Alec Guinness, became an international bestseller when published in 1996. This new volume contains Sir Alec's journal since the summer of that year." "The summer of 1996 ended well with an operation that successfully treated an eye which had been useless for almost ten years. Further good news on the health front followed in March 1997. These were tumultuous times for the nation - the election of Mr Blair, the death of Diana - but other matters continued to hold equal importance in Hampshire: the difficulties of the plane trees during the dry summer, the extraordinary appearance in the skies of the Hale-Bopp comet, the vulnerability of the hassocks in Steep Church and the experiments with Chinese cooking, encouraged by Ken Hom's TV enthusiasm." "Shakespeare's birthday (his 433rd) is celebrated with a visit to Baz Luhrmann's film William Shakespeare's Romeo and Juliet, which gives pleasure despite its title and despite the fact that it leads to the melancholy thought that the worst Romeo ever was 'none other than me, moi-meme'. And a revival of Terence Rattigan's Cause Celebre at the Lyric prompts some memories of the playwright who is putting bums on seats thirty years after he was dismissed by the avant-garde."--BOOK JACKET.Title Summary field provided by Blackwell North America, Inc. All Rights Reserved… (more)

Kirkus
The retired actor muses with humble precision on the little details of his life; the results are sometimes mundane, often witty, and occasionally transcendent. Readers of Guinness’s previously published diary (My Name Escapes Me, 1997) might expect more of the same, but the new volume is subtly different. The previous book was a traditional diary with clearly marked dates; this one has few dates, instead meandering like a stream-of-consciousness novel, or, as Guinness puts it, “a sort of sluggish river.”

LibraryThing member NativeRoses
Since Sir Alec is telling the truth, this memoir is somewhat darker than My Name Escapes Me. Illness and the funerals of friends are part of any older persons life. But this is still very enjoyable as he shares with us glimpses of a life extraordinarily well lived. Highly recommended.