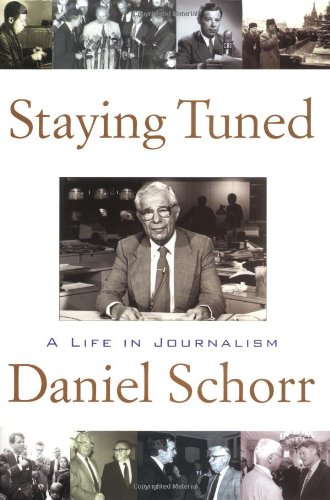 Staying tuned : a life in journalism

"Daniel Schorr is both a national and an international eyewitness. At home, he has covered and analyzed major events from the McCarthy anti-Communist hearings of the 1950s to the Clinton impeachment hearings of the 1990s. As CBS's chief Watergate correspondent, he won three Emmys for his coverage of that scandal - during which he found himself on Nixon's "enemies" list." "Abroad, he opened the CBS bureau in Moscow in 1955, arranged an unprecedented television interview with Soviet boss Nikita Khrushchev, and was on hand for every major European event from the founding of NATO to the building of the Berlin Wall. At home and overseas his no-holds-barred approach to covering the news landed him in trouble with the authorities. He may be one of the only journalists investigated by both the KGB and the FBI."--BOOK JACKET.Title Summary field provided by Blackwell North America, Inc. All Rights Reserved… (more)

LibraryThing member cameronl
An interesting autobiography from a legend in broadcast journalism. Schorr is the last of the "Murrow Boys" still working in journalism. He has seen, and has been a part of, much of the biggest news stories of the second half of the 20th century, from WWII Nazi Germany and the building of the Berlin Wall, to Watergate, the fall of communism, and CIA scandal. A fascinating look at history and a view of broadcast journalism.… (more)

Taking on the world : Joseph and Stewart Alsop, guardians of the American century by Robert W. Merry
In all his glory : the life of William S. Paley, the legendary tycoon and his brilliant circle by Sally Bedell Smith
The Chief: The Life of William Randolph Hearst by David Nasaw
Fat man in a middle seat : Forty years of covering politics by Jack Germond
Edward R. Murrow and the birth of broadcast journalism by Bob Edwards
5 more
Scotty : James B. Reston and the rise and fall of American journalism by John F. Stacks
Personal History by Katharine Graham
Power, privilege, and the Post : The Katharine Graham story by Carol Felsenthal
Cronkite by Douglas Brinkley
The first casualty : from the Crimea to Vietnam : the war correspondent as hero, propagandist, and myth maker by Phillip Knightley
Fewer