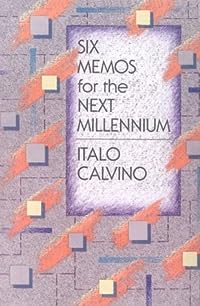 Six memos for the next millennium

"At the time of his death, Italo Calvino was at work on six lectures setting forth the qualities in writing he most valued, and which he believed would define literature in the century to come. Here, in Six Memos for the Next Millennium, are the five lectures he completed, forming not only a stirring defense of literature, but also an indispensable guide to the writings of Calvino himself. He devotes one "memo" each to the concepts of lightness, quickness, exactitude, visibility, and multiplicity, drawing examples from his vast knowledge of myth, folklore, and works both ancient and modern. Readers will be astonished by the prescience of these lectures, which have only gained in relevance as Calvino's "next millennium" has dawned"--

LibraryThing member JCamilo
Calvino famous last speeches - he actually died before finishing the 6th and last one - in his light and clear style and literature analyse of what he considered would be the most important traits for literature in the XXI Century.
3 more
LibraryThing member thronm
A brilliant set of reflections on literature, art, historical development of ideas and modern times. Deserving of a reading once a year at least.
LibraryThing member rmagahiz
In the five essays here (the sixth went unwritten because of the author's death), we are pointed towards a great variety of authors, ancient and modern, whose work exemplified one aspect of artistic value: Lightness, Quickness, Exactitude, Visibility, and Multiplicity. Calvino includes himself in the fifth chapter and it is both sad and fascinating to speculate on what it tells us what direction he might have continued his writing had he lived. It will send a Goodreads member interested in such matters off to seek out the books mentioned.… (more)
LibraryThing member jonfaith
I would not be so drastic. I think we are always searching for something hidden or merely potential or hypothetical, following its traces whenever they appear on the surface. I think our basic mental processes have come down to us through every period of history, ever since our Paleolithic forefathers, who were hunters and gatherers. The word connects the visible trace with the invisible thing, the absent thing, the thing that is desired or feared, like a frail emergency bridge flung over an abyss.

Calvino's posthumous lectures are a grand gallop across a cherished earth of letters. The Six Memos For The Next Millennium are a celebration of Lightness, Quickness, Exactitude, Visibility and Multiplicity (the sixth was never written at the time of Calvino's passing). The ruminations and citations extend from Ovid and Lucretius onward through Dante, Boccaccio, Shakespeare, Cyrano, Valery, Flaubert, Musil and, especially, Borges. This is a wonderful construction, one without grandiosity, but teeming with an organic eloquence.

Were I to choose an auspicious image for the new millennium, I would choose that one: the sudden agile leap of the poet-philosopher who raises himself above the weight of the world, showing that with all his gravity he ahs the secret of lightness, and that what many consider to be the vitality of the times--noisy, aggressive, revving and roaring--belongs to the realm of death, like a cemetery for rusty old cars.
… (more)
Fewer