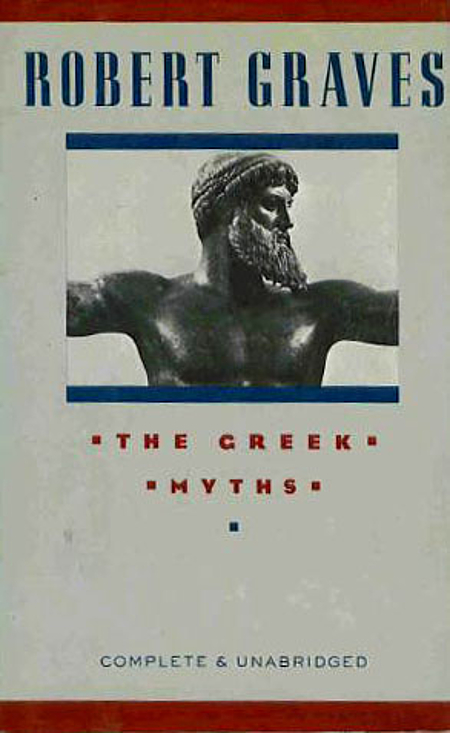 Including many of the greatest stories ever told - the labours of Hercules, the voyage of the Argonauts, Theseus and the minotaur, Midas and his golden touch, the Trojan War and Odysseus's journey home - Robert Graves's superb and comprehensive retelling of the Greek myths for a modern audience has been regarded for over fifty years as the definitive version. With a novelist's skill and a poet's eye, Graves draws on the entire canon of ancient literature, bringing together all the elements of every myth into one epic and unforgettable story. Ideal for the first time reader, it can be read as a single, continuous narrative, while full commentaries, with cross-references, interpretations, variants and explanations, as well as a comprehensive index of names, make it equally valuable as a work of scholarly reference for anyone seeking an authoritative and detailed account of the gods, heroes and extraordinary events that provide the bedrock of Western literature. The result is a classic among classics, a treasure trove of extraordinary tales and a masterful work of literature in its own right.… (more)

LibraryThing member TomVeal
On the one hand, Robert Graves is an elegant writer and possesses a thorough knowledge of classical mythology. On the other, his notes are full of pseudo-scholarship derived from highly speculative notions about the development of pagan Greek religion.
10 more
LibraryThing member hazzabamboo
Comprehensive, but the stories themselves are not given primacy. The culture whence they came, the power of the ideas and (potentially) the language to convey them too often get lost in the mass of genealogies, and recording of all the different versions of a myth. As the editorial intro says, Graves clearly immersed himself in the literature, which gives him a great insight, but in the afterwords which follow each chapter he's keener to show off what he's read than to illuminate it. Apparently, he also adopted a pretty cavalier attitude to contemporary (though not classical) scholarship, though I think that's less important given the subject matter. In the second, more recent foreword, Graves details his theory that ambrosia was in fact magic mushrooms...… (more)
LibraryThing member jpsnow
Read section overviews, not interpretation (which are aparently highly criticized and not widely accepted). Definitive overview with complete citations to all great works. A good reference.
LibraryThing member DirtPriest
Review of Volume I: One down, one to go on this chore of a read. To be honest, I gave up (to a degree) on trying to keep every single thing straight. There are so many names and places, places named after mythic people, similar names (Metis and Thetis, Aglauros and Agraulos are just a few examples) 32 names beginning with 'Ae', and a 37 page index of names, just too much data for complete absorption. Not to mention the contradictory stories from other sources. There is a lot of 'Other people say...' something totally different. But, the book is also stuffed with data making analogies between the mythic stories and how they relate to the invasions and migrations of people and ideas in the pre-Classical era before the historical era that we know much more about. Most of the myths recall the patriarchal Dorian, Mycenaean, Aeolian and other invaders merging with pre-existing goddess cults. Hence the allusions to the mighty heroes either conquering or ritually marrying representatives of animal totems, not to mention the whole concept of a 'tanist' twin to the king, ritually sacrificed at the end of his reign. All in all, pretty confusing and convoluted stuff. Graves' work has been downgraded by the academic world, but I think there is a lot of truth to his ideas, even if a scholar could poke holes in his theory here and there, there is just too much supporting data. Not to mention similarity between mythic tales from far flung areas of Europe and West Asia. Like the Greeks claiming that the Danaids travelled to 'Hyperborea' beyond the Pillars of Heracles, and the Irish claim a mythic origin from the Tuatha de Danaan, who came from the south and ridded Eire of the Balrogs. Just an example, but is it coincidence? There are further examples of this linkage in trees representing the same 'magical' properties in both Greece and Ireland, and a matching tree magic based calendar. This topic is more the domain of The White Goddess, but the Greek Myths by Graves is presented in such a way, with a synopsis of the versions of a story followed by an analysis of what they mean applied to what I suppose you could call 'The White Goddess Theory', that these works go hand in hand, or opposite sides of the same coin, if you will.

The first book is pretty much the early creation myths, and stories about local heroes, all early stuff, along with Perseus and Theseus. The second covers Oedipus, Heracles, Jason and the Argonauts, and the mythic side of Homer, all later additions to the Greek saga.

As a concluding remark, these make a great reference and are important works of scholarship, but Edith Hamilton's 'Mythology' is a much more accessible, concise and frankly handier book on the subject, and is a easy to find Signet paperback. Her 'The Greek Way' is also a great primer on the literary history of Athens.

Review of Volume II: Boy am I glad that's over. Not a very interesting book as far as the mythic stories are concerned, but filled to overflowing with the data that makes up those stories. They just had all of the fun sucked out of them and replaced with information. Like trying to read Leviticus and all of the geneologies and laws that it contains. A great compendium, but a boring read. I have honestly never fallen asleep so many times reading any single book ever. Still, it is an impressive work that will be referred back to many times over.… (more)
LibraryThing member Tendulkar01
long since superseded, but still very readable
LibraryThing member chicjohn
Fascinating if a bit convoluted.
LibraryThing member jonsim
The most comprehensive and scholarly study of the Greek Myths and relating them to the way Greeks lived and thought in the milenium from 1400BC.
LibraryThing member Jen_Muller
I liked reading this book. I bought it as a part of an art history class, but I enjoyed the tales and provides great contexts to a lot of Ancient Greek and Western art.
LibraryThing member cbruiz
The Greek myth I chose was “Dionysus’s Nature and Deeds.” With Dionysus’s birth, Hera ordered the titans to tear him to shreds, from which a pomegranate tree sprouted from his blood split. His grandmother Rhea brought him back to life, and was kept under watch by Persephone, who then took him to King Athamas of Orchomenus, and was temporality reared as a girl. Hermes then transformed Dionysus into a ram, hiding him in a cave, where until reaching manhood, was fed on honey by appointed nymphs. Once affirmed by Hera as Zeus’s son, he travelled the world with his tutor Silenus, and an army of Satyrs and Maenads. Traveling to Europe, he brought the vine, defeated the Titans and restored King Ammon to his throne. He then went off to India, conquering the whole country, and teaching the art of “viniculture.” Returning to Europe, he was purified for his murders by his grandmother Rhea and initiated into her mysteries. He then invaded Thrace, but met by King Lycurgus, he was the only one to escape to sea from his captured army. Rhea helped the prisoners to escape, driving Lycurgus mad, and from such phenomena, Lycurgus axed his own son, Dryus to death; from this act, all the lands of Thrace grew barren. Dionysus subsequently travelled to Boeotia, stopping in Thebes, and was arrested by King Pentheus, along with his Maenads; but King Pentheus, struck by the madness of Dionysus, shackled a bull instead. Reaching Boeotia, he was acknowledged with divinity. Arriving at Icaria, on his way to Naxos, he was captured by pirates. To escape, he made a vine grow and envelop the mast of the ship, turned their oars into serpents, became a lion, and filled the ship with “phantom beasts and the sound of flutes,” inciting the fearing pirates to leap overboard and become dolphins. Reaching Naxos, he married Ariadne, and having established his worship throughout the world, sits at the right hand of Zeus. Although a bit advanced for the younger child, the Greek Myths offer depictions of the Greek Gods, Goddesses, Monsters, tales, etc, accurately transcribed from the Greek language. The myths themselves offer a look into a world and culture lost to the winds of time, and re-living the Greek Myth is a treat everyone may diverge their consciousness into a belief structure once held true to ancient civilization.… (more)
LibraryThing member ruric
Scholarly, academic, comprehensive retelling of the myths with copius footnotes. The comprehensive and academic slant perhaps mean that the stories themselves don't have as much room to shine through as i some other versions and translations. But definitely worth giving shelf space to for the sheer depth and breadth of the myths covered.… (more)
LibraryThing member hbergander
The poet’s starting point in the Greek Myths is the change from matriarchal society to a patriarchal one as background for his retellings, which may have been inspired by the many years he passed at the Mediterranean island of Majorca.
Fewer