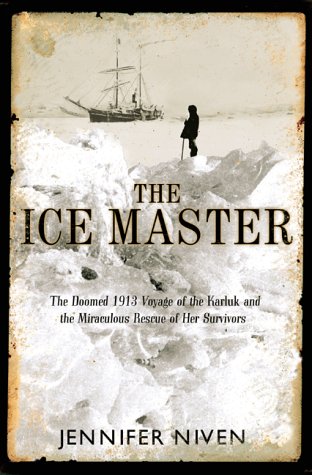 The ice master : the doomed 1913 voyage of the Karluk

It was to be the greatest and most elaborate Arctic expedition in history, with the largest scientific staff ever taken on such a journey. It's leader, Vilhjalmur Stefansson, was celebrated for his studies of Eskimo life and, with this mission, hoped to find evidence that proved his staunchly held belief that there was a last unexplored continent, hidden beneath the vast polar ice cap. In June 1913, the H.M.C.S. Karluk set sail from the Esquimalt Naval Yard in Victoria, British Columbia. Six weeks later, the arctic winter had begun, the ship was imprisoned in ice, and those on board had been abandoned by their leader. For five months, the Karluk remained frozen in a massive block of ice, drifting farther and farther off course. In January 1914, with a thunderous impact, the ice tore a hole in the vessel's hull, and the redoubtable captain, Robert Bartlett, gave orders to abandon ship. With nothing but half the ship's store of supplies and the polar ice beneath their feet, Captain Bartlett, twenty-one men, an Inuit woman and her two small daughters, twenty-nine dogs, and one pet cat were now hopelessly shipwrecked in the middle of the Arctic Ocean, hundreds of miles from land. These castaways had no choice but to try to find solid ground where they could wait while they struggled against starvation, snow blindness, a gruesome and mysterious disease, exposure to the brutal winter -- and each other. Bartlett and one member of the party soon set across the ice to seek help. Nine months later, twelve survivors were rescued by a small whaling schooner and brought back to civilization. The Ice Master is an epic tale of true adventure that rivals the most dramatic fiction. Drawing on thediaries of those who were rescued and those who perished, and even an interview with one living survivor, Jennifer Niven re-creates with astonishing accuracy and immediacy the Karluk's ill-fated journey and her crew's desperate attempts to find a way home from the icy wastes of the Arctic.… (more)

LibraryThing member xtofersdad
This is a sad book telling of how human behaviour is affected when fear, hunger and danger combine with extreme cold and poor leadership. It's a well told story diligently researched from the individual journals and diaries kept by the scientists and crew but it lacks an index and a decent map showing the places referred to in the text.… (more)
5 more
LibraryThing member theportal2002
This book was gripping. The type of experiences here are not usually made into movies and this series of events certainly deserved one.
LibraryThing member amerynth
I am a huge fan of polar exploration stories and Jennifer Niven's book "The Ice Master: The Doomed 1913 Voyage of the Karluk" fits right in among the great books I've read on the subject.

The Karluk expedition occurred after the North Pole was already discovered and appeared to have little purpose, except to get the organizer out onto the ice, as he left 20 other men to fend for themselves. More than half of the crew died after the ill-fated Karluk got trapped in the pack ice.

Niven mostly tells the story well. There were parts that dragged a bit, mainly because she appears to have had so much source material. I had trouble keeping so many crew members straight-- it didn't help that so many members of the crew had last names beginning with an M.

That said, the story is told so well it reads more like a work of fiction. I would absolutely read another book of Niven's based on this one.… (more)
LibraryThing member waltzmn
"I'm starving faster than you are."

That could almost be the refrain of the many failed expeditions to the arctic in the mid-nineteenth century and after. The Karluk voyage was fairly typical. Captain Bob Bartlett was hired to take a crew of scientists to the ice north of Alaska. The ship was not really up to the task. Many of the scientists abandoned the expedition and went home on their own. After they left, the Karluk was frozen in, then destroyed by the ice. The men survived to reach Wrangel Island in the Siberia arctic. Captain Bartlett sledged out to find help. The men he left behind, trapped in the cold and the dark, got sick and starved; many died before they could be rescued.

So far, frankly, so typical. But this does not answer why. The Karluk should never have been employed in this service, but there was time to bring off supplies. Several of the men on the ship, in effect, mutinied. Their time on Wrangel Island was consumed in arguing and, indeed, fighting.

And what of Bob Bartlett? Niven is full of praise for him. And, to be fair, the crew was all alive when he left, and he did bring rescue. But he also wrecked the ship, and let the men go out of control. It was not a pretty picture.

As a chronicle, this book is good. But as an insight into the horrid problem of "arctic madness," something is missing. Most readers, I think, will want more than a chronology. They will want an explanation.… (more)
LibraryThing member TRIPLEHHH
Excellent Read!
LibraryThing member nyiper
Absolutely fascinating and so wonderful that the author included an epilogue to describe the lives of the survivors. I love the true stories about Arctic adventures because they are always so incredible and I am continually overwhelmed that there are people who are willing and eager to get out there and explore that frozen place.… (more)
Fewer

Ghosts of Cape Sabine : the harrowing true story of the Greely Expedition by Leonard F. Guttridge
Fatal passage : the untold story of John Rae, the Arctic adventurer who discovered the fate of Franklin by Kenneth McGoogan
Shackleton's Forgotten Men: The Untold Tragedy of the Endurance Epic by Lennard Bickel
I may be some time : ice and the English imagination by Francis Spufford
Shackleton's boat journey by F. A. Worsley
2 more
Cherry : a life of Apsley Cherry-Garrard by Sara Wheeler
In the heart of the sea : the tragedy of the whaleship Essex by Nathaniel Philbrick
Fewer