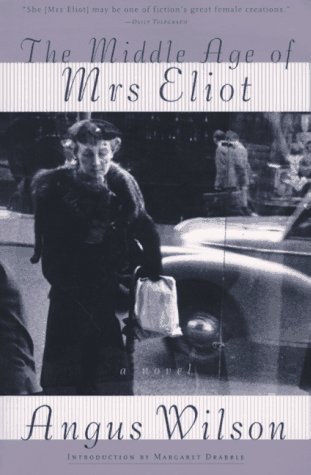 The middle age of Mrs. Eliot

Meg Eliot is the wife of a successful barrister and with that comes a lovely home in Westminster, cocktail parties and a round of charity committees. She is the model wife and her life is one of ease, contentment and privilege. All that changes though when she is suddenly left widowed after a senseless tragedy. Totally alone she is thrust into a struggle to reconstruct her life as she realises that she doesn't really know who she is anymore or who she is supposed to be. The Middle Age of Mrs Eliot follows Meg as she tries to make sense of the realities of life, of living and contemplates the future and its possibilites. What she finds is the ability to survive and, also, the joys of new friendships, new opportunities and perhaps even the idea of a new love. Described by the Daily Telegraph as 'one of fiction's great female creatures', Meg Eliot is a powerful heroine who inspired readers when she first appeared in 1958.… (more)

LibraryThing member thorold
The middle age of Mrs Eliot was Wilson's second novel. It inverts the central idea that most literary plots are based on, by taking as its central characters two people in their early forties - Meg Eliot and her brother David - who are in happy, loving relationships at the start of the book but are both confronted with the challenge of having to find a way to live without their partners.

There's an obvious level of irony in the way the conventional, smart, attractive barrister's wife Meg falls apart much more spectacularly, and with far less support from her friends, than the alternative, gay, lefty, pacifist, failed-literary-scholar-turned-garden-centre-proprietor David. But it isn't expressed anythng like as crudely as that, and Wilson cunningly manages our sympathetic engagement by shifting the viewpoint from one sibling to the other as we advance through the story. There's a lot of very English defining of exact social gradations: the flashy London circles Meg and Bill move in initially; the shabby-genteel setting of Meg's "lame-duck" widow/divorcée friends; David and Gordon in their patrician radicalism in Sussex; their workers and neighbours. All with interesting frictions when they rub together, and all sorts of awkward cultural non-overlaps.

And there's a certain amount of literary self-mockery going on, too: David's slightly sterile academic interest in the novels of the 1780s; Meg's annoying but sometimes rather revealing tendency to see herself in terms of literary heroines (Mrs Dalloway in the opening chapters, Maggie Tulliver when she moves in with her brother; Emma when she becomes aware of her destructive compulsion to interfere in other people's lives...). Clearly we're not supposed to take any of it 100% seriously, but Wilson does come up with some quite interesting glimpses into the ways that the complexities of social life collide with the complexities of human emotions.

(And, not least, this is a fifties novel in which a gay central character is portrayed as a mature, responsible human being whose sexuality is neither driving him to destruction nor making him a figure of fun to the reader, something that might seem rather trivial sixty years on, but must have been a big deal at the time.)… (more)
3 more
LibraryThing member otterley
This book comes from the middle of Angus Wilson's career, when he was relatively prolific and - as Mrs Eliot - verging on middle age. As befits a titular character, Meg Eliot is at the centre of the book which takes a triptych form - the mise en scene, when she is queen bee of her circle; the crisis, when, bereaved, she alienates herself to the point of breakdown and the resolution, when she finds a different place for herself in the world. As the book moves to a conclusion her (also bereaved) brother becomes the heart of the novel, as she finally decides to step out of the picture into silence. She is a curiously elusive character for someone so relentlessly introspective, as indeed is her brother. They both seem fey, unfixed, curiously judgmental, trapped in a sort of limbo - and somehow aware that they are trapped. I found this a very difficult book to like. The characters are resolutely unsympathetic and difficult to believe (though we are aware that we are watching from Meg's very skewed perspective, which may not be skewed in the way she thinks it is) and the book is very long and descriptive, endlessly analysing with very little action. It seems so embedded in the social mores and nuances of its day that it feels dry and desiccated; terrible things happen, emotions are stretched to their limits, but the only point where I felt moved was when Meg broke down completely. Wilson somehow manages to deaden the novel - at least partly to mirror the near death and rebirth of his heroine - but from fifty years away his dead hand, weighed down further by the manners, mores and material possessions of the 1950s feels a heavy burden for the reader to bear.… (more)
LibraryThing member debnance
I wish I knew why I choose the books to read that I do. It strikes me as bewilderingly odd that I would pick this book up at the same time that I picked up The Group. The copyright is 1958, near that of The Group, and the book’s themes fit in nicely with those of The Group. Mrs. Eliot is happily entering into middle age, when her husband, her support, is killed and she is forced to redefine her life. An early book that I would classify as women’s fiction, like The Group, but, also like The Group, it is more that that. It’s thoughtful and clever, beautifully written, with characters that surprise you. Like The Group, I’d almost classify it as a Must-Read.… (more)
LibraryThing member etxgardener
A lot of modern readers will not like this book because it's written in a very old fashioned, almost 19th Century way . The book has no chapters, but instead is broken into three "books" denoting the main character's progression. The writing has lengthy descriptions as well as meditations from the characters. None of this is very appealing to the modern reader and that is unfortunate because this is an absolutely brilliant book about a woman's journey from cossetted wife to a fully realized independent woman.

When we firs meet Meg Eliot she is a rather officious committee woman who is married to a successful barrister and about to embark on a 'round the world journey. We see her presiding over the"Aid to the Elderly" committee and later playing the perfect hostess at a farewell party she throws for herself. But on the journey everything goes terribly wrong in Indonesia when her husband is killed taking a bullet meant for the local Minister of Education. Upon returning home, she finds that her lovely life was actually a sham; her husband was mired in gambling debts and she will be forced to sell her house in fashionable Westminster as well as her prized collection of decorative porcelain in order to have money with which to live.

Slowly learning to draw on her own strengths and talents, Meg Elliot begins to remake herself into a modern woman. Her journey is not without its mistakes and sorrows, but in the end she emerges triumphant., happily living her own life in her own way. This book is definitely worth the effort.… (more)
Fewer