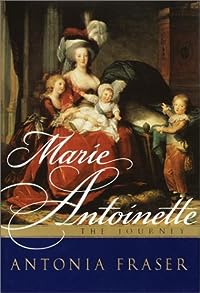 France's beleaguered queen, Marie Antoinette, wrongly accused of uttering the infamous "Let them eat cake," was the subject of ridicule and curiosity even before her death; she has since been the object of debate and speculation and the fascination so often accorded tragic figures in history. Married in mere girlhood, this essentially lighthearted, privileged, but otherwise unremarkable child was thrust into an unparalleled time and place, and was commanded by circumstance to play a significant role in history. Antonia Fraser's lavish and engaging portrait of Marie Antoinette, one of the most recognizable women in European history, excites compassion and regard for all aspects of her subject, immersing the listener not only in the coming-of-age of a graceful woman, but also in the unraveling of an era.… (more)

LibraryThing member cabegley
As a kid, I really enjoyed biographies, but I have only just gotten back into reading them recently. I have particularly fallen in love with Claire Tomalin, whose biographies of Jane Austen and Samuel Pepys captivated me over the past few years. Antonia Fraser didn't grab me with that same intensity, but her biography of Marie Antoinette was solid, if light on in-depth analysis and broader context.

Fraser paints an extremely sympathetic portrait of Marie Antoinette, a caring family woman who was dreadfully wronged and maligned in her time and for the over 200 years since her violent death. While I would have preferred a more balanced look at the Queen's life (while she surely wasn't the sole, or even a major, cause of France's economic woes in the latter part of the 18th century, Marie Antoinette's lavish spending and her attempts to forward Austria's interests in French politics certainly didn't help matters), I appreciated the side of the story I did get. Married off to the French Dauphin at the age of 14, the youngest Archduchess of Austria was sent by carriage away from her beloved family, home, and friends to a 16-year-old husband who vastly preferred hunting to being with his new wife. Living in a highly ritualized, rigid court existence where her every move was watched--some to copy, and others to condemn--Marie Antoinette endured the humiliation of seven years of unconsummated marriage that was earnestly discussed by everyone from her mother (in scolding letters to her) to the pamphleteers (who speculated, wrongly, on her finding sexual consolation with many of the men and women of her inner circle). Is it any wonder she turned to an increasingly frantic party lifestyle?

When Marie Antoinette and the mild, indecisive Louis XVI finally became truly man and wife three years or so into his reign, and (most importantly) started producing heirs, their domestic tranquility would have turned them into no more than a brief paragraph in French history if not for the Revolution. It was only under extreme adversity that Marie Antoinette came into her own, showing strength and courage through four long years of terror.

Fraser's epilogue lays out the analysis that I longed to have ongoing in the book, which was filled instead with too many portents of doom ("In her enjoyment of Figaro, Marie Antoinette could not imagine the consequences to her personally of the piece's wild popularity . . .") for my taste. And I longed for a timeline and a "Cast of Characters" to help me keep everything straight. All in all, though, Ms. Fraser's exhaustive research makes this a worthwhile read.… (more)
24 more
LibraryThing member thom001
The French queen who emerges from the pages of Antonia Fraser's Marie Antoinette: The Journey is a sympathetic figure, a well-meaning yet flawed woman tragically caught up in political and social forces beyond her control. In this biography, Fraser achieves an effective mixture of exhaustive research and engaging storytelling, weaving together the documentary evidence to produce a rich narrative of the Austrian archduchess who became a French queen. A reading of this work enhances the viewing of Sofia Coppola's 2006 film Marie Antoinette, based rather closely on the first two-thirds of Fraser's book, up to the day when the royal family was forced to decamp from Versailles to Paris; symbiotically, a viewing of the Coppola film brings many of the characters and events described by Fraser vividly to life, illustrating key episodes in Marie Antoinette's reign as dauphine and queen consort of France.

One failing of Fraser's biography arises from the very complexity of its subject. Even though the author includes a number of supplementary aids to understanding the history – genealogical charts, a map of 18th-century Europe, a detailed index – the sheer number of characters and the overwhelming complexity of French revolutionary politics sometimes make events difficult to follow. Additional appendices, for example a list of major historical figures and a simplified timeline of events, would help the reader in making sense of all the details of the narrative. But even without them, Fraser has skillfully accomplished a remarkable feat. She breathes new life into a legendary historical figure who lost hers over two centuries ago, and in doing so she makes the story of Marie Antoinette and the history of her times as compelling as any adventure novel, as touching as any romance.… (more)
LibraryThing member setnahkt
Well, she never said “Let them eat cake”, and was actually fairly kind to the poor for a person who had no idea how they lived. Her story is really rather sad – groomed from infancy to be a royal bride, she learned all sorts of court etiquette and the noble accomplishments – playing the harpsichord and virginal, embroidery, flirtation and diplomacy – but was never able to read or write with fluency. Her education apparently did not include the activities of the birds and the bees, since her brother (the Austrian emperor) had to visit the court of Versailles and have a long private talk with King Louis on bedroom activities before they had children. (One of the problems of royalty is total lack of privacy – diplomatic letters from Austrian agents in France detail exactly what the King was doing wrong, but nobody but a fellow ruler could explain it to him, and apparently Marie didn’t know what she was supposed to be doing either). About half the book takes place after the Revolution started; ironically King Louis more or less fell apart while Marie, belying her reputation as an airhead, pulled herself together and kept herself more or less intact until the end.

She adds some speculation to things, but I found it easy to tell when she was taking artistic license as opposed to telling the history outright. She relates anecdotes and her resources are impressive.

I read the book because I saw the movie (starring Kirsten Dunst) and am very glad it brought me to the wonderful works by Antonia Fraser.… (more)
LibraryThing member Melissande
Very nice and not so boring as some biography are
LibraryThing member fiercebunny
This is a very enjoyable and understandable biography of a time, a place and a woman. It's very accessible to non-history minded people, but would be good for history buffs as well.
LibraryThing member tairngire
An enlightening biography about one of the most gossiped about women in history. Though not necessarily a intensely in-depth history, it is both well-researched and an enjoyable read. Fraser is known for having a sympathetic view towards the Queen, yet her tone comes across as trying to right a 300 year old subject of yellow journalism and public scapegoat rather than painting her as squeaky clean. Overall a good read.… (more)
LibraryThing member catzkc
This is coming from someone who typically does not read noon-fiction. I have a hard time staying awake whenever I make the attempt. So please consider these notes in that light.

This book is obviously well-researched. I can't imagine there isn't anything about MA that isn't covered in this book. Even I can tell this historian really knows her stuff. And the reading wasn't as dry as I had feared. She is a great writer.

This book is great for not only learning and understanding about MA and her life, but also about life in the French court under Louis XV and Louis XVI, and the society, culture and politics of that time, both in France and between France and other countries.

It's really sad. They did try to change things in their own way. Make things simpler. But forces around them proved too great to surmount.

My only complaint is all the name dropping! This was my greatest struggle with this book.

It was immediately apparent to me that no way was I going to be able to keep track of all the people she mentions - with all the titles; Duc, Madame, Duchess, Comte, Comtesse, Count, Marquis, Princess/Prince. And of course it seems like most of them are named Louis, Louise, Marie, Maria, Marianne, Christine, Caroline, Therese, Theresa, Joseph, Josepha - you get the point (not that the author can be blamed for that point). One paragraph I counted had at least 14 names, not counting MA's! It's good for someone really into doing research, but that's not me. After I kind of gave in and just let that go (which is something that is really difficult for me to do - I have a need to comprehend and understand every sentence I'm reading in a book), our became a little easier. I figured I would probably recognize the most important ones when I needed to. It was most definitely worthwhile sticking it out!… (more)
LibraryThing member mstrust
This is a nice, thick non-fiction about the life of the French queen, from birth through to her execution. It's my first bio of Antoinette so even though Fraser writes from an almost completely sympathetic angle, and that isn't to say a skewed angle, I learned so much. I didn't even know that the woman wasn't French but Austrian!
After reading hundreds of pages, seeing her go from a rather neglected Austrian princess to a neglected French princess, living through the early years of her marriage to Louis XVI, who seems to have pretended she was invisible for about the first ten years until they became so attached to each other, it really was sad to read of how they and their children were treated by the men who drove the revolution.
Bios can seem a little dry in the beginning, but I never had my interest lag in this one, and now I actually understand what led up to the French Revolution. And no, she never said, "Let them eat cake."… (more)
LibraryThing member TGPistole
Excellent. Fascinating insight into the French royalty before and during its transient fall.
LibraryThing member LibraryCin
As a little girl, Marie Antoinette was an Archduchess of Austria. She later married Louis XVI, the future king of France. They ruled France in the late 18th century, but that came to an end via the French Revolution. They had to run for their lives, which in the end, they both lost. This is her biography, so it's nonfiction.

This was very good. I must admit to not knowing a lot about her, the time period, or the other people involved, so I learned a lot. Because I don't know as many people, at times there were a lot of people to try to keep straight, but I think Fraser did a pretty good job of at least keeping clear the main “players”. It's a long book, but it was very good. And I think it's the first I've read by Fraser. I'm sure I'll pick up more and I'll likely read more about Marie Antoinette, as well.… (more)
Fewer