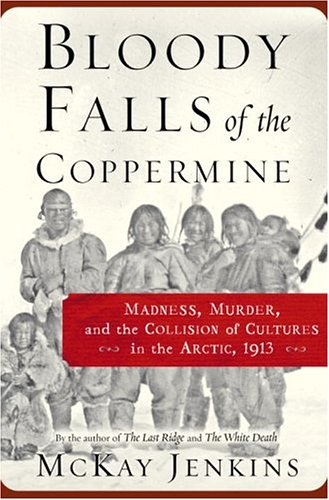 Bloody Falls of the Coppermine : madness, murder, and the collision of cultures in the Arctic, 1913

The author of The Last Ridge journeys to the Canadian Arctic to describe the murders of two Catholic priests during their 1913 mission to the Eskimos of the region, their cannibalization by Inuit hunters, the long and difficult quest to find the killers, and the two trials that followed, in a study of the sometimes violent conflict between disparate cultures. In the winter of 1913, high in the Canadian Arctic, two Catholic priests set out on a dangerous mission to reach a group of Eskimos and convert them. Upon reaching their destination, the two priests were murdered, their livers removed and eaten. Over the next three years, one of the Arctic's most tragic stories became one of North America's strangest and most memorable police investigations and murder trials. First, a remarkable Canadian Mountie led a trio of constables on a three-thousand-mile journey in search of the bodies and the murderers. Then, after the astonishing murder trial that followed, the Eskimos were acquitted of the charges, despite the fact that they were tried by an all-white jury. So outraged was the judge that he demanded a retrial-predictably, the second time around, the Eskimos were convicted. An almost perfect parable of colonialism, and a rich exploration of the differences between Christianity and Eskimo mysticism, Bloody Falls of the Coppermine combines the intensity of true crime and the romance of wilderness adventure. Ultimately, it is a clear-eyed look at what happens when two utterly different cultures come into violent conflict.… (more)

LibraryThing member dickcraig
In 1913, two Catholic priests headed to Northern Canada to convert the native Eskimos to Christianity. They were ill-equipped and did not speak the language. Both priests ended up being murdered and their livers were partially eaten to ward off evil spirits. The two suspects admitted to the crime and were taken to a Canadian court to be tried. The first trial was declared a mistrial, but the second ended up with a guilty verdict. This book was a classic in a clash of cultures. The priests had tried to explain the life of Jesus lived in the desert, when the Eskimos had no idea what they were talking about. The same went for trees, warm seas, etc. It was a good book and an easy read. I have read Jenkins' other books and this is as good as his others.… (more)
2 more
LibraryThing member bnbookgirl
A very interesting account of a little known event in history, the murder of two priests in the Arctic, the search for the killers, and the subsequent trial. Jenkin's provides great research and insight into this crime, to the clash of cultures, the tough conditions of the Arctic, and the difficulty in dealing with this issues. For readers who like survival stories this is a really well written account.… (more)
LibraryThing member Marlene-NL
Finished yesterday. Overall a good read. I felt very bad for the Eskimo's. Why do those religion people think they have to go there, interfere in their lives? It was even a battle between religions who would get to them first? They brought sickness and nearly decimated the Eskimo people. It pissed me off sometimes. And what about that judge. Is that justice? wow! A judge cannot be so for or against a conviction nowadays, at least he can but cannot show this which is a good thing.
All in all an interesting and quick read. 3.5 stars.… (more)
Fewer

The ice master : the doomed 1913 voyage of the Karluk by Jennifer Niven
Walking on the Land by Farley Mowat
Ghosts of Cape Sabine : the harrowing true story of the Greely Expedition by Leonard F. Guttridge
People of the Deer by Farley Mowat