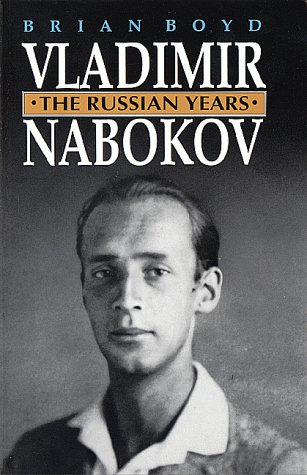 This first major critical biography of Vladimir Nabokov, one of the greatest of twentieth-century writers, finally allows us full access to the dramatic details of his life and the depths of his art. An intensely private man, Nabokov was uprooted first by the Russian Revolution and then by World War II. Transformed into a permanent wanderer, he did not achieve fame until late in life, with the success of Lolita. In this first of two volumes, Brian Boyd vividly describes the liberal milieu of the aristocratic Nabokovs, their escape from Russia, Nabokov's education at Cambridge, and the murder of his father in Berlin. Boyd then turns to the years that Nabokov spent, impoverished, in Germany and France, until the coming of Hitler forced him to flee, with wife and son, to the United States. This volume stands on its own as a fascinating exploration of Nabokov's Russian years and Russian worlds, prerevolutionary and émigré. In the course of his ten years' work on the biography, Boyd traveled along Nabokov's trail everywhere from Yalta to Palo Alto. The only scholar to have had free access to the Nabokov archives in Montreux and the Library of Congress, he also interviewed at length Nabokov's family and scores of his friends and associates. For the general reader, Boyd offers an introduction to Nabokov the man, his works, and his world. For the specialist, he provides a basis for all future research on Nabokov's life and art, as he dates and describes the composition of all Nabokov's works, published and unpublished. Boyd investigates Nabokov's relation to and his independence from his time, examines the special structures of his mind and thought, and explains the relations between his philosophy and his innovations of literary strategy and style. At the same time he provides succinct introductions to all the fiction, dramas, memoirs, and major verse; presents detailed analyses of the major books that break new ground for the scholar, while providing easy paths into the works for other readers; and shows the relationship between Nabokov's life and the themes and subjects of his art.… (more)