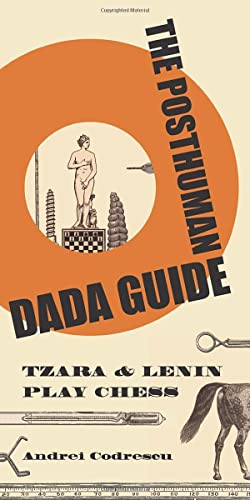 This is a guide for instructing posthumans in living a Dada life. It is not advisable, nor was it ever, to lead a Dada life."--The Posthuman Dada Guide The Posthuman Dada Guide is an impractical handbook for practical living in our posthuman world--all by way of examining the imagined 1916 chess game between Tristan Tzara, the daddy of Dada, and V. I. Lenin, the daddy of communism. This epic game at Zurich's Café de la Terrasse--a battle between radical visions of art and ideological revolution--lasted for a century and may still be going on, although communism appears dead and Dada stronger than ever. As the poet faces the future mass murderer over the chessboard, neither realizes that they are playing for the world. Taking the match as metaphor for two poles of twentieth- and twenty-first-century thought, politics, and life, Andrei Codrescu has created his own brilliantly Dadaesque guide to Dada--and to what it can teach us about surviving our ultraconnected present and future. Here dadaists Duchamp, Ball, and von Freytag-Loringhoven and communists Trotsky, Radek, and Zinoviev appear live in company with later incarnations, including William Burroughs, Allen Ginsberg, Gilles Deleuze, and Newt Gingrich. The Posthuman Dada Guide is arranged alphabetically for quick reference and (some) nostalgia for order, with entries such as "eros (women)," "internet(s)," and "war." Throughout, it is written in the belief "that posthumans lining the road to the future (which looks as if it exists, after all, even though Dada is against it) need the solace offered by the primal raw energy of Dada and its inhuman sources.… (more)

The Esteemed Poet eee kUMMINGs famously said that there WAS some shit he Would not eat. Knowing the context that primed the quote's power, nonetheless upon hearing it I asked myself: So there is a lot of shit that he will eat, or would have, or did.
I am against eating shit, and have never eaten shit. I have spent a lifetime watching my fellow Americans eating shit. I am accustomed to the sight. But I won't eat it, because I am not accustomed to eating it, only to watching my fellow Americans eating shit. So I did not eat Andrei Codrescu's The Posthuman Dada Guide, Tzara and Lenin Play Chess, a book that is shit. Eek, cries kUMMINGs, I would not have eaten that.
So I had to take a novel approach to the book and read it.
Reading shit is not at all like clearing a path in a virgin, going at a jungle with a machete, but that means nothing, for neither have previously been done. Books that are shit intentionally attract flies, some of them huge. The flies spread filth and disease—the resultant maggots when found are never identified.
For example, when Codrescu writes

and I could go on.… (more)
1 more
LibraryThing member librarianbryan
This book could never be successful if it was actually what it purports to be.It's a meditation on the successes and failures of the interwebs, and an appreciation of Romanian Jews' impact on the international avant-garde. On both fronts the book is a huge success.Codrescu's truefanism for Tzara rings clear. Lenin is obviously the villain, but Codrescu concedes at the beginning he was right about everything. The matter at hand is what do about it. Tzara had the right idea. He did the best he could.After an explosive poem-theory opener, there is one rough passage of boring history that anyone who is reading the book probably already knows. Soon enough Codrescu brings it back around with bits of biography, Romanian history, political & social analysis, in jokes, linguistics, and mysticism. Dada triumphant indeed. For added glee he throws in some stunning misinformation. Facts are facts, don't be a lazy reader.I can't agree with all his insights but if I did the text would have been boring. Beware of claims of authenticity. Beware of massaging the palm that feeds. Devilish darlin, I love you. I was laughing out loud at many points.He has the decency not to diss Stoppard, but perhaps he should have. Perhaps he should have shouted him down in a paper hat. I enjoyed this book far more than I did Travesties.My library classifies it as "fiction."… (more)
Fewer