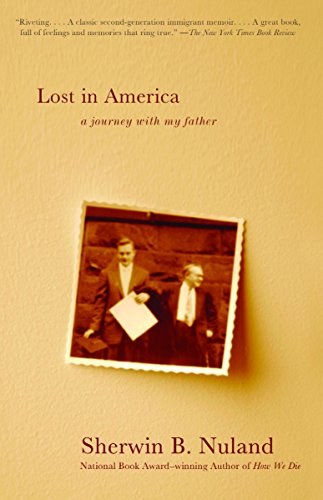 Lost in America: A Journey with My Father

by Sherwin B. Nuland

"He walks with me through every day of my life, in that unsteady, faltering gait that so embarrassed me when I was a boy. Always, he is holding fast to the upper part of my right arm... As we make our way together, my father - I called him Daddy when I was small, because it sounded American and that is how he so desperately wanted things to seem - is speaking in the idiosyncratic rhythms of a self-constructed English."."So Sherwin Nuland introduces Meyer Nudelman, his father, a man whose presence continues to haunt Nuland to this day. Meyer Nudelman came to America from Russia at the turn of the twentieth century, when he was nineteen. Pursuing the immigrant's dream of a better life but finding the opposite, he lived an endless round of frustration, despair, anger, and loss: overwhelmed by the premature deaths of his first son and wife; his oldest surviving son disabled by rheumatic fever in his teens; his youngest son, Sherwin, dutiful but defiant, caring for him as his life, beset by illness and fierce bitterness, wound to its unalterable end. Lost in America, Nuland's harrowing and empathetic account of his father's life, is equally revealing about the author himself. We see what it cost him to admit the inextricable ties between father and son and to accept the burden of his father's legacy."--BOOK JACKET.… (more)

LibraryThing member froxgirl
After reading innumerable memoirs featuring irresponsible parents, here is one so different - where the child hates his father for reasons which seem cruel and heartless.

I read and really admired Dr. Nuland's "How We Die" and he himself died recently. His obit mentioned this book and it is a shocker. Beyond being the quintessential Jewish boyhood in the Bronx, the introduction describes Nuland's near-lobotomy in his search of a cure for his severe depression. What follows is truly disturbing, including a shocker involving his father's own physical wretchedness and how Dr. Nuland discovered the cause.

Almost unbearable in its bravery and truth and an essential read.… (more)

The vanishing American Jew : in search of Jewish identity for the next century by Alan M. Dershowitz
Pioneer Jews : A new life in the Far West by Harriet Rochlin
The Jewish Americans : three centuries of Jewish voices in America by Beth S. Wenger
The film club by David Gilmour