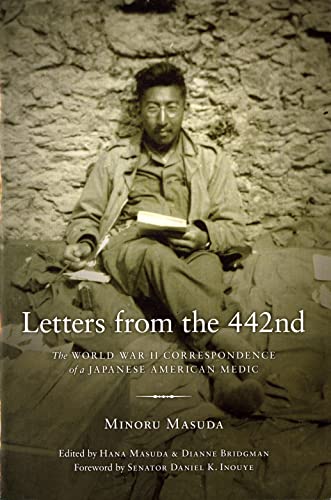 Letters from the 442nd: The World War II Correspondence of a Japanese American Medic (Scott and Laurie Oki Series in Asian American Studies)

This is the first collection of letters by a member of the legendary 442nd Combat Team, which served in Italy and France during World War II. Written to his wife by a medic serving with the segregated Japanese American unit, the letters describe a soldier's daily life. Minoru Masuda was born and raised in Seattle. In 1939 he earned a master's degree in pharmacology and married Hana Koriyama. Two years later the Japanese struck Pearl Harbor, and Min and Hana were imprisoned along with thousands of other Japanese Americans. When the Army recruited in the relocation camp, Masuda chose to serve in the 442nd. In April 1944 the unit was shipped overseas. They fought in Italy and in France, where they liberated Bruyeres and rescued a "lost battalion" that had been cut off by the Germans. After the German surrender on May 3, 1945, Masuda was among the last of the original volunteers to leave Europe; he arrived home on New Year's Eve 1945. Masuda's vivid and lively letters portray his surroundings, his daily activities, and the people he encountered. He describes Italian farmhouses, olive groves, and avenues of cypress trees; he writes of learning to play the ukulele with his "big, clumsy" fingers, and the nightly singing and bull sessions which continued throughout the war; he relates the plight of the Italians who scavenged the 442nd's garbage for food, and the mischief of French children who pelted the medics with snowballs. Excerpts from the 442nd daily medical log provide context for the letters, and Hana interposes brief recollections of her experiences. The letters are accompanied by snapshots, a drawing made in the field, and three maps drawn by Masuda.… (more)