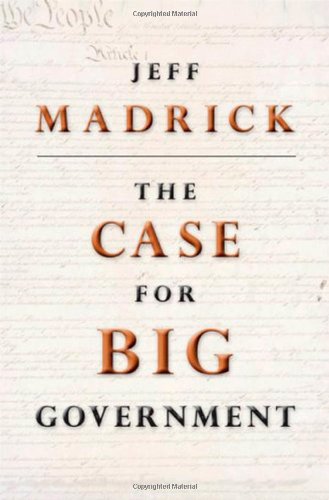 The Case for Big Government (The Public Square)

Political conservatives have long believed that the best government is a small government. But if this were true, noted economist Jeff Madrick argues, the nation would not be experiencing stagnant wages, rising health care costs, increasing unemployment, and concentrations of wealth for a narrow elite. In this perceptive and eye-opening book, Madrick proves that an engaged government--a big government of high taxes and wise regulations--is necessary for the social and economic answers that Americans desperately need in changing times. He shows that the big governments of past eras fostered greatness and prosperity, while weak, laissez-faire governments marked periods of corruption and exploitation. The Case for Big Government considers whether the government can adjust its current policies and set the country right. Madrick explains why politics and economics should go hand in hand; why America benefits when the government actively nourishes economic growth; and why America must reject free market orthodoxy and adopt ambitious government-centered programs. He looks critically at today's politicians--at Republicans seeking to revive nineteenth-century principles, and at Democrats who are abandoning the pioneering efforts of the Great Society. Madrick paints a devastating portrait of the nation's declining social opportunities and how the economy has failed its workers. He looks critically at today's politicians and demonstrates that the government must correct itself to address these serious issues. A practical call to arms, The Case for Big Government asks for innovation, experimentation, and a willingness to fail. The book sets aside ideology and proposes bold steps to ensure the nation's vitality.… (more)

LibraryThing member tjwilliams
Within the first ten pages of The Case for Big Government, Jeff Madrick’s argument is mortally wounded by a single sentence: “If government is managed poorly, it can have damaging effects.” Every word that follows is based on the premise that a large government can efficiently and effectively manage a large economy when there is scant evidence (at least in the United States) that this is possible. Madrick goes to great lengths to point out the successes of government interventions into economies both domestic and foreign but fails to connect those past successes to his projected future.

Madrick displays a great deal of cognitive dissonance throughout the book. Early on, he explains America’s high GDP per capita as a function of the fact that more Americans work than in most other countries. This, he argues, is due to the lower wages offered to low-skilled workers by American firms. Essentially, he is giving tacit agreement to the common conservative argument that high minimum wages increase unemployment. Yet one of his solutions, given at the end of the book, is to establish a “serious”—one assumes he means “high”—minimum wage. But surely this would result in fewer jobs and higher unemployment. Madrick does not say how this would be beneficial to the American economy. He also suggests that the federal government should pay half of all qualifying college students’ tuition without addressing the inevitable cost increases that introducing $30 to $35 billion (his numbers) into the higher education market would cause.

Madrick’s work also suffers because of his intense focus on manufacturing. Any time he writes about wages and productivity (especially in comparison to other countries) he only focuses on the manufacturing sector, despite the fact that the United States has largely ceased being a manufacturing economy and has transitioned largely into a service economy. Madrick laments the loss of a time when low-skilled, low-educated workers could earn a middle-class income through manufacturing. The problem with this bygone era, which Madrick admits, is that manufacturing was never capable of providing a middle-class lifestyle for workers except through “much political turmoil, lost personal independence, and the active participation of government.” With the decreasing importance of the manufacturing sector, that government intervention is gone and low-skilled, low-educated workers are no longer able to live a middle-class lifestyle. What Madrick does not address is why the government should take money from the skilled, educated workers of the middle and upper classes and use it to prop up people whose skills and education were never capable of providing that lifestyle without government interference.

Ultimately, Madrick makes a few decent arguments, but even they are dwarfed by the fact that he cannot sidestep the elephant in the room; that elephant being the public’s trust in the federal government. The government long ago proved that it is more interested in using its power to enrich certain individuals rather than the country as a whole. Handing them even more power to determine who wins or loses in our economy is simply a bad idea.… (more)

Inequality matters : the growing economic divide in America and its poisonous consequences by James Lardner
The argument : billionaires, bloggers, and the battle to remake Democratic politics by Matt Bai
Boiling Point: Democrats, Republicans, and the Decline of Middle-Class Prosperity by Kevin P. Phillips
I have seen the future : A life of Lincoln Steffens by Peter Hartshorn
The society of equals by Pierre Rosanvallon
1 more
The price of politics by Bob Woodward
Fewer