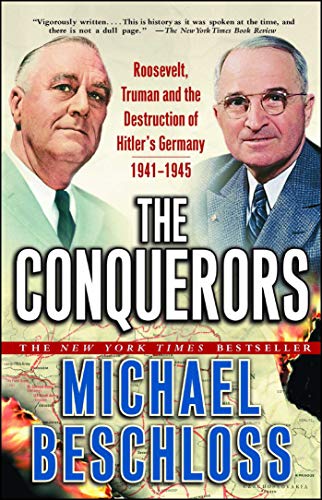 The Conquerors: Roosevelt, Truman and the Destruction of Hitler's Germany, 1941-1945

As Allied soldiers fought the Nazis, Franklin Roosevelt and, later, Harry Truman fought in private with Churchill and Stalin over how to ensure that Germany could never threaten the world again. Eleven years in the writing, drawing on newly opened American, Soviet and British documents as well as private diaries, letters and secret audio recordings, Michael Beschloss's gripping narrative lets us eavesdrop on private conversations and telephone calls among a cast of historical giants. The book casts new light upon Roosevelt's concealment of what America knew about Hitler's war against the Jews and his foot-dragging on saving refugees. FDR's actions so shocked his closest friend in the Cabinet, Secretary of the Treasury Henry Morgenthau, Jr., that Morgenthau risked their friendship by accusing the President of "acquiescence" in the "murder of the Jews." After the Normandy invasion, "obsessed" by what he had learned about the Nazis and the Holocaust, Morgenthau drew up a secret blueprint for the Allies to crush Germany by destroying German mines and factories after the European victory. As The conquerors shows, FDR endorsed most of Morgenthau's plan, and privately pressured a reluctant Churchill to concur. Horrified, Secretary of State Cordell Hull and Secretary of War Henry Stimson leaked the plan to the press at the zenith of the 1944 campaign. Hitler's propagandist Joseph Goebbels denounced the Roosevelt-Churchill "Jewish murder plan" and claimed it would kill forty-three million Germans. Republican presidential candidate Thomas Dewey charged that by stiffening German resistance, publicity about Morgenthau's plan had cost many U.S. soldiers' lives. The conquerors explores suspicions that Soviet secret agents manipulated Roosevelt and his officials to do Stalin's bidding on Germany. It reveals new information on FDR's hidden illnesses and how they affected his leadership--and his private talk about quitting his job during his fourth term and letting Harry Truman become President. It shows us FDR's final dinner, in April 1945, in Warm Springs, Georgia, at which the President and Morgenthau were still arguing over postwar Germany. Finally it shows how the unprepared new President Truman managed to pick up the pieces and push Stalin and Churchill to accede to a bargain that would let the Anglo-Americans block Soviet threats against Western Europe and ensure that the world would not have to fear another Adolf Hitler.… (more)

LibraryThing member wwj
More about Morgenthau (SecTreas) than FDR or Truman, it is still interesting and well written.

Truman by David G. McCullough
The Rise of Theodore Roosevelt by Edmund Morris
Theodore Rex by Edmund Morris
Where the buck stops : the personal and private writings of Harry S. Truman by Margaret Truman
Memoirs by Harry S. Truman: Vol. 1, Year of Decisions by Harry S. Truman
6 more
Presidential Courage: Brave Leaders and How They Changed America 1789-1989 by Michael R. Beschloss
Traitor to His Class : The Privileged Life and Radical Presidency of Franklin Delano Roosevelt by H. W. Brands
Reaching for Glory: Lyndon Johnson's Secret White House Tapes, 1964-1965 by Michael R. Beschloss
The years of Lyndon Johnson. [Volume 3], Master of the senate by Robert A. Caro
Ike : an American hero by Michael Korda
April 1865 : the month that saved America by Jay Winik
Fewer