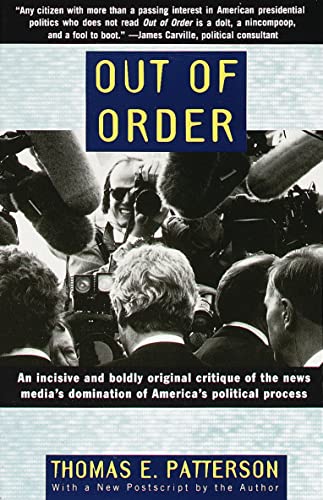 Out of Order: An incisive and boldly original critique of the news media's domination of America's political process

Why are our politicians almost universally perceived as liars? What made candidate Bill Clinton's draft record more newsworthy than his policy statements? How did George Bush's masculinity, Ronald Reagan's theatrics with a microphone, and Walter Mondale's appropriation of a Wendy's hamburger ad make or break their presidential campaigns? Ever since Watergate, says Thomas E. Patterson, the road to the presidency has led through the newsrooms, which in turn impose their own values on American politics. The results are campaigns that resemble inquisitions or contests in which the candidates' game plans are considered more important than their goals. Lucid and aphoristic, historically informed and as timely as a satellite feed, Out of Order mounts a devastating inquest into the press's hijacking of the campaign process -- and shows what citizens and legislators can do to win it back.… (more)

LibraryThing member ABVR
Thomas Patterson thinks that the US system of electing a president is badly broken, and that the role of the press is a big part of what's wrong with it.

Press coverage of presidential campaigns is driven, he argues, by reporters' need to have news to report every day. The candidates' positions on major issues doesn't change over time, so it isn't news. Opponents' attacks, rumors, and polls all change repeatedly over time, providing an endless source of fresh stories. Thus, they *become* the majority of the "news" that comes out of a campaign. Reporters' proximity to the candidates also tends to make them jaded and cynical, regarding even fresh ideas as stale because they've heard them repeated dozens of times. The substance of complex ideas is rarely reported, because it doesn't fit the narrow definition of "news."

Press coverage is biased neither to the political right nor to the political left. Instead, it is biased against politicians in general. Despite repeated assertions by the press, Patterson argues, elected officials *do* keep most of their campaign promises . . . and those that they don't keep are frequently modified or trimmed to match political realities, rather than being discarded. Stories on candidates are overwhelmingly negative, and journalists' obsession with spotting "lies" or "gaffes" that they can report leaves them apparently incapable of distinguishing real duplicity from simple misstatement. This negativity not only undermines the campaign process, Patterson contends, but undermines the winner's ability to govern.

Out Of Order makes this case briskly and compellingly, using statistics, graphs, and anecdotes to show the extent to which press coverages distorts and trivializes presidential campaigns. It's not a pretty picture, but most voters who pay close attention to the process will find the phenomena he cites familiar. One drawback is that the book is now more than 15 years old: pre-Fox News, pre-Internet, pre-blog. The 1994 paperback edition ends by lamenting the impact on Bill Clinton of the "media frenzy" surrounding the Whitewater investigation. The Monica Lewinski scandal, which would generate a far worse frenzy, was just around the corner,

Patterson also offers solutions to the problems, the principal one being to radically shorten the campaign and revamp (or eliminate) the primary system in favor of a pre-WWII model in which party leaders play the dominant role in selecting candidates. The effect, he argues, would be to diminish candidates' need to court the press in order to build name recognition among voters, and to purify the relationship between candidates and the press by limiting the role of the latter in making or breaking the fortunes of the former. I'm deeply ambivalent about the value of this idea, but it's intriguing to consider, and Patterson lays out the case for it in detail.

As I write this, the morning after the presidential election of 2008, I can't help but wonder: Under the system that Patterson proposes, would the leaders of the Democratic Party have had the foresight to put forward Barrack Obama, who gave them their biggest victory in 44 years?… (more)

Spin cycle : inside the Clinton propaganda machine by Howard Kurtz
The kingdom and the power : behind the scenes at The New York Times : the institution that influences the world by Gay Talese
Boiling Point: Democrats, Republicans, and the Decline of Middle-Class Prosperity by Kevin P. Phillips