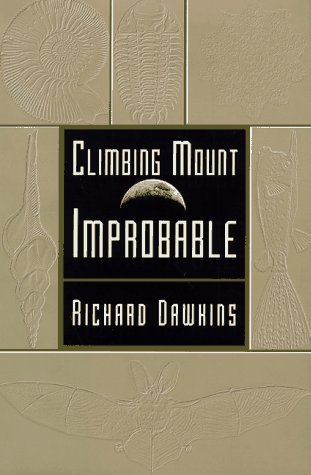 A brilliant book celebrating improbability as the engine that drives life, by the acclaimed author of The Selfish Gene and The Blind Watchmaker. The human eye is so complex and works so precisely that surely, one might believe, its current shape and function must be the product of design. How could such an intricate object have come about by chance? Tackling this subject--in writing that the New York Times called "a masterpiece"--Richard Dawkins builds a carefully reasoned and lovingly illustrated argument for evolutionary adaptation as the mechanism for life on earth. The metaphor of Mount Improbable represents the combination of perfection and improbability that is epitomized in the seemingly "designed" complexity of living things. Dawkins skillfully guides the reader on a breathtaking journey through the mountain's passes and up its many peaks to demonstrate that following the improbable path to perfection takes time. Evocative illustrations accompany Dawkins's eloquent descriptions of extraordinary adaptations such as the teeming populations of figs, the intricate silken world of spiders, and the evolution of wings on the bodies of flightless animals. And through it all runs the thread of DNA, the molecule of life, responsible for its own destiny on an unending pilgrimage through time. Climbing Mount Improbable is a book of great impact and skill, written by the most prominent Darwinian of our age.… (more)

Creation Ministries
Dawkins writes in a lucid style, with never a dull moment—Dawkins throws in much informative material in real science which keeps the reader interested. And the real science in the book camouflages the many just-so speculations Dawkins resorts to.

LibraryThing member stefano
Less 'preachy' than "The Blind Watchmaker", it contains in-depth discussions of the plausible evolution of several complex systems (wings, eyes) and of general mechanisms that could drive the co-evolution of body structures (shell morphology, embriology). A good book to put in the hands of an intelligent teen ager and a very good read for an interested adult. Still missing, I find, is a good sense of the methods of the science which Dawkins expounds on. Dawkins shows you the (likely) solution, but not the details of the methods used to obtain it. It makes you want to get into this branch of science but doesn't show you what are the steps you need to take to do so.… (more)
3 more
LibraryThing member thorold
I don't really need Dawkins to persuade me that Darwinian evolution is an amazingly powerful idea (...or if I did, he already did the job forty years ago), but there's still a lot of pleasure in following his devastatingly clear explanations of some of the more unexpected places where it can lead us.

In this book, Dawkins looks at a selection of topics including the design of spider-webs, the possible shapes of shells, and the surprisingly complex sex-life of figs, as well as going in depth into two of the areas that are regularly held up as too complex to have "evolved by chance": vision and flight. The objections of Mrs Darwin and more recent doubters are rapidly dealt with, as Dawkins sets out the convincing evidence that both have developed many times, independently, in different parts of the evolutionary tree, and to many different levels of sophistication, and shows how even something as complex as the camera-eye we have nowadays could have developed through a series of quite plausible intermediate stages.

As in The blind watchmaker, there is a lot of reference to experiments with computer-simulations of evolutionary processes done by himself and other researchers, and Dawkins doesn't try to hide the limitations of such simulations, which can only assess the success of a mutation in terms of arbitrary pre-defined rules, whilst in the real world such mutations may (or, more likely, may not) turn out to overcome problems that we could only define with hindsight.

In his penultimate chapter, Dawkins tries to show us what an amazing thing life is, by setting out some of the challenges we would have to overcome to create an artificial system with the same properties. One of the pre-requisites, he tells us, would be a clearly impracticable machine he calls a "3D-printer", which would be able to create copies of actual physical components under the instructions of computer code. Not much more than twenty years later, I have such a machine on my desk...

As others have said, Dawkins is less enjoyable to read than he could be because of his constant and sometimes rather strident diatribes against the straw-men who are trying to confound him with silly, weak arguments against evolution. In the privileged environment of the printed page it's easy to start doubting that these straw-men actually exist (or, if they do, that anyone actually takes them seriously), and we often rather wish he would just get on with telling us about the science. But of course they do exist, they ignore scientific arguments, and Dawkins clearly sees it as part of his duty as a public communicator of science to warn us against them.… (more)
LibraryThing member Niecierpek
I feel that this book was written solely as an attempt to refute ‘intelligent design’ theory. From the beginning to the end it provides examples of how evolution itself with no external aid could have led the species to the complexity it now possesses. The book starts and ends with a tale of the fig, and how it was a fig, and not an apple, that was offered to Adam by Eve, if Paradise had existed at all, that is.
The fig grows at the top of Mountain Improbable- the peak of evolution as we know it, and to get there we are led through the models of evolution of spider webs, gradual evolution of wings and eyes, variety of shell design and body design. For example, a seemingly infinite number of shell variations can be accounted for by the relationships among three variants only: flare (expansion rate), verm (how wide the shell is) and spire(how tall it is).
Mount Improbable itself is a peak, or many peaks of the development of various very complex, and seemingly too complex, elements and forms life takes to develop on its own just through the natural selection and survival pressure. Dawkins, though, takes each element he discusses: spiders and their webs, wings, etc., and shows (sometimes involving computer models into his demonstrations) how it is all possible and feasible, and not really that difficult if done step by step.
Dawkins frustrated me from time to time, even though I agree with him all along. He is such a hard core fundamentalist, that he has lost the ability to derive pleasure from seeing the world through non-Darwinian eyes. Figs and paradises exist surely to provide esthetic pleasure for us, and flowers definitely are there to make our world more beautiful :o)… (more)
LibraryThing member Devil_llama
The Mount Improbable of the title is the probability of life evolving. Dawkin's demonstrates very eloquently exactly how life managed to climb that mountain of improbability.
Fewer