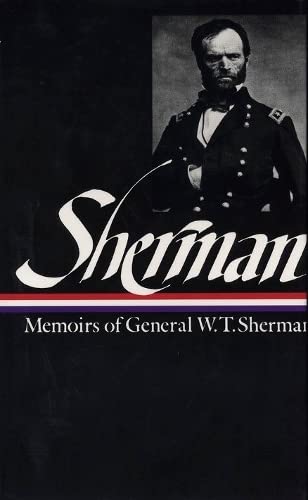 New York : Library of America : Distributed to the trade in the U.S. and Canada by Viking Press, c1990.

Before his spectacular career as General of the Union forces, William Tecumseh Sherman experienced decades of failure and depression. Drifting between the Old South and new West, Sherman witnessed firsthand many of the critical events of early nineteenth-century America: the Mexican War, the gold rush, the banking panics, and the battles with the Plains Indians. It wasn't until his victory at Shiloh, in 1862, that Sherman assumed his legendary place in American history. After Shiloh, Sherman sacked Atlanta and proceeded to burn a trail of destruction that split the Confederacy and ended the war. His strategy forever changed the nature of warfare and earned him eternal infamy throughout the South. Sherman's Memoirs evoke the uncompromising and deeply complex general as well as the turbulent times that transformed America into a world power. This Penguin Classics edition includes a fascinating introduction and notes by Sherman biographer Michael Fellman.… (more)

LibraryThing member LeahsChoice
General Sherman tells a good story, and in this book he certainly lives up to his reputation for talking a lot. Now and then he gets bogged down in details, but most of what he has to say is interesting, and quite descriptive.
3 more
LibraryThing member gmicksmith
Averysboro, N.C. and the conflict there is described by Sherman. He nonchalantly recites that 108 are buried on the first day and "a serious loss" the next day of 12 officers and 65 men killed (pp. 783-784). Sherman personally visited the temporary hospital (which I drove by when visiting) and details two stories with his men while at the scene.… (more)
LibraryThing member margaretfield
very well written autobiography but also drags a lot
LibraryThing member buffalogr
The period of the book includes only the siege on Atlanta and the "march to the sea"...one of the first American examples of total war taken to the enemy's people. The book is composed, largely, of correspondence between Sherman and other generals. Although he adds some personal opinions, it's largely about movements of the Army...boring to me. I plodded through the book expecting some good things later. As a career airman, I began to see the beginnings of a separate air force as well as the subsequent strategies of some air pioneers.… (more)
Fewer