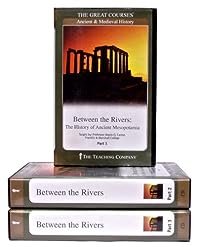 Between the Rivers, Part 1: The History of Ancient Mesopotamia (The Teaching Company: The Great Courses)

"In this course, we will explore Mesopotamian societies from the Neolithic era (c. 9,000 B.C.) to the defeat of the great Persian Empire at Gaugamela by Alexander the Great (331 B.C.) The study will take us from the world of international diplomacy with powerful neighbors in Egypt, Syria, and Anatolia to the mundane issues of daily life, such as providing food for the family, curing disease, and settling legal disputes. It examines archaeological discoveries, historical documents, and literary texts to explore how these lands between the rivers created a civilization that has contributed to the development of our own. A recurring them of the course is the creation of an urban lifestyle, which becomes increasingly sophisticated and complex as cultures expand."-- p. 1 of guidebook.… (more)

The Aeneid of Virgil (The Teaching Company: The Great Courses) by Elizabeth Vandiver