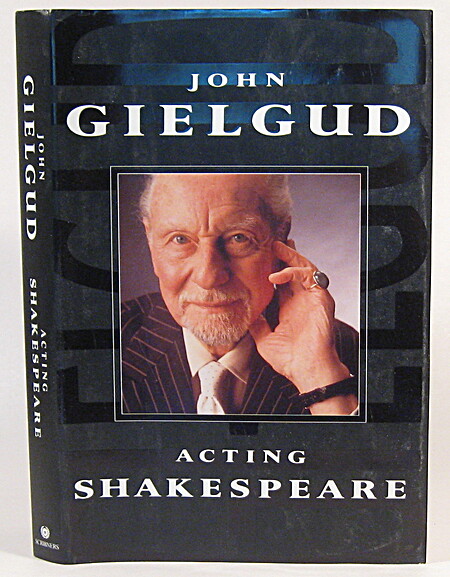 "In his two seasons at London's Old Vic Theatre from 1929 to 1931 John Gielgud established himself in the forefront of Shakespearean actors, and in the six decades since then he has scaled the heights of most of the great parts, from Romeo, Richard II and Hamlet, to Macbeth, Lear and Prospero. American theatregoers acclaimed his 1936 Hamlet, which broke all previous records for the run of the play on Broadway, ironically exceeded only by his own production with Richard Burton in the title-role in 1964. In the Fifties and Sixties he toured his solo Shakespeare recital Ages of Man in more than sixty cities in Canada and the United States and recorded it for television; in 1959 he brought his original Stratford-on-Avon production of Much Ado About Nothing to Boston and New York, where he bade farewell to his brilliant Benedick." "His Shakespearean films have been some of the most successful, notably his Cassius in Julius Caesar with Marlon Brando and James Mason, King Henry IV in Orson Welles's Chimes at Midnight and his most recent - Prospero's Books, directed by Peter Greenaway, in which he at last achieved his long-held ambition to bring The Tempest to the screen." "In this book Sir John brings together a lifetime's experience of Shakespeare, as both actor and director, and illuminates the work and the man with his characteristic humor and intuitive perception of the challenges and rewards offered by these great verse-dramas. He draws vivid pictures of many fellow-actors and directors, and with the help of evocative and lavish illustrations weaves a brilliant theatrical tapestry of the twentieth century."--BOOK JACKET.… (more)