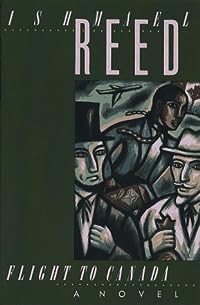 "Ishmael Reed's parody of slave narratives the classical literature of the African American tradition which redefined the neo-slave genre and launched a lucrative academic industry. Some parodies are as necessary as the books they answer. Such is the case with Flight to Canada, Ishmael Reed's scathing, offbeat response to conventional anti-slavery novels such as Uncle Tom's Cabin. Though Flight to Canada has been classified by some as a post race novel, the villains and the heroes are clear. Three slaves are on the run from the Swille plantation. Among them, the most hotly pursued is Raven Quickskill, a poet who seeks freedom in Canada, and ultimately hopes to return and liberate others. But this particular Civil War era landscape is littered with modern elements, from Xerox copiers to airplanes, and freely reimagines historic figures as sacred as Abraham Lincoln. A comedy flashing with insight, Flight to Canada poses serious questions about history and the complex ways that race relations in America are shaped by the past. This ebook features an illustrated biography of Ishmael Reed including rare images of the author"--Publisher.… (more)

LibraryThing member andersonden
A very sharp and funny satire (and more than satire, commentary) on Uncle Tom's Cabin and its popularity. This review is a rather gross simplification of a great novel, actually.
1 more
LibraryThing member RebeccaAnn
This book, a satiric take on black slavery, had a few funny moments. And maybe I'm just too dumb to get it, but I didn't find myself enjoying it quite as much as I thought I would. I think most of it has to do with the fact that I'm not as familiar with the Civil War era history as I wish I were and therefore, some of the funnier quips just didn't register. It had some interesting notions of identity based on cultural heritage, but not much else (in my opinion). Perhaps everything just went over my head or perhaps it just wasn't there to begin with. Either way, this book was a quick read so I might try it again some day when I'm more familiar with both postmodernism and the Civil War but for now, I'm just going to put it to the side and let smarter people enjoy it :)… (more)
Fewer