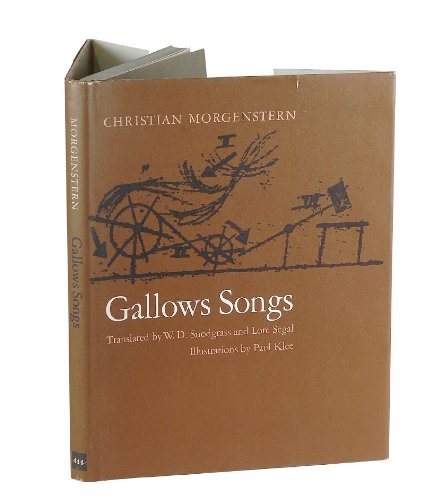 "Christian Morgenstern (1871-1914) was a German poet, theosophist, and translator whose nonsense poems have been among the best-known and best-loved works in Germany throughout this century. Often compared to the drolleries of Lewis Carroll and Edward Lear, Morgenstern's poems are whimsical yet haunting, a rare blend of humor and odd metaphysical intimations." "Morgenstern wrote the first of his Golgenlieder after he and some friends had returned from a carefree outing past Gallows Hill near Potsdam and formed a "fraternal order of the gallows." His collection, published in Germany between 1905 and 1916, eventually comprised 286 poems. This new edition is a bilingual selection of some 90 poems from the original work. The reader is introduced to inventions like the clock that moves slowly or quickly as its sympathy for the clock watcher dictates; the luncheon newspaper that, when read, also satisfies one's hunger, the mail that is sent from a vacation retreat on the antlers or tails of bucks." "To translate Morgenstern is a daunting task, and Walter Arndt has succeeded brilliantly, following the poet's verbal acrobatics, his phonetic, semantic, and syntactic play with words and clauses, and, where possible, his trick of stripping discourse of conventions and pretensions by a bizarre literal interpretation of conventional phrases and metaphors. His translation of Morgenstern's poems of nonsense, or "supersense," will be treasured by scholars of the German lyric and by children of all ages."--BOOK JACKET.Title Summary field provided by Blackwell North America, Inc. All Rights Reserved… (more)