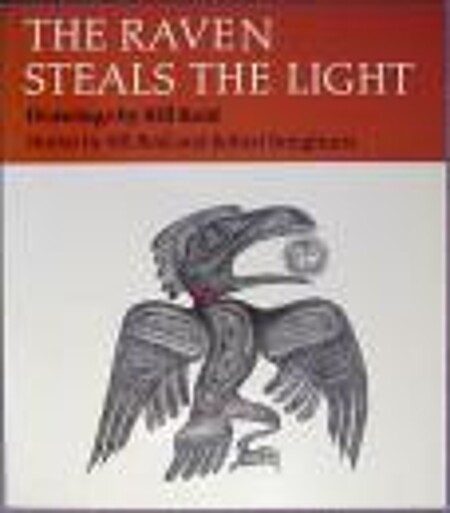 The raven steals the light

An elegant reissue of a timeless collection of Haida myths, with a new preface by Claude Levi-Strauss. Ten masterful, complex drawings by Bill Reid are accompanied by ten episodes from Haida mythology told by Bill Reid and Robert Bringhurst. The result brings Haida art and mythology alive as never before in an English-speaking world. The collection includes, says Reid, "a good selection of bestiality, adultery, violence, thievery and assault, for those who like that sort of thing."

LibraryThing member donkeytiara
Native American stories from the Haidas of the northwest coast (Queen Charlottie Islands, to be exact). Like other mythologies, the stories are sometimes closely related, but give great insight into the culture, social structure and most importantly, what qualities in others were revered and shunned. GREAT alaska cruise reading.… (more)
4 more
LibraryThing member francescadefreitas
Delightful stories, with a lovely poetic turn of phrase and strong rhythm - easy to read aloud. There's a haunting final section about a Haida story that is lost, because no one remembers it any more.
LibraryThing member bfgar
Anyone who ever watched the great CBS series will remember how important the Raven was to the Native Americans living in that small village. In this case, the microcosm truly did represent the world outside.

Raven is a "trickster god." These deities are found throughout the world. They represent chaos, a concept that does not translate well to Christian theology. It is not, as some theologians would have it, equivalent to evil. Instead, it simply represents the state of the universe before the creator god organized it. Tricksters are often extremely naive in the way they approach "life." They are usually easily defeated by other characters in the believers' mythos, and often seen as objects of ridicule and humor. It is likely that the concept of the Christian devil began as a trickster before the emphasis on the sufferings of Jesus on behalf of humanity became an important part of the religion. Loki, in Norse mythology, is a trickster, as is Coyote in the Apache mythos.

The back cover of this book further explains:

"The ten delightful Native American stories ... retellings of Haida myths and folktales. They ranger from bawdy tales of how the firt Haida were brought to the Queen Charlotte Islands, to poignant narratives of the complexities of love in a world where animals speak, dreams come alive, and demigods, monsters, and people live side by side.

Have fun reading this book. And remember that chaos is always only a sneeze away.… (more)
LibraryThing member uufnn
This work includes ten stories from Haida mythology. The reviewer from Canadian Literature wrote, "These are simply the best versions of Indian tales I have read: they are colloquial yet poetic, precise yet spilling outside their boundaries, accumulating and then blending into one another."
LibraryThing member eldang
Interesting stories, skilfully retold and accompanied with beautiful drawings. The existence of this book is both a happy and a sad thing: putting an oral tradition into writing both to share it with the world and to protect it in case things continue to get worse for the storytellers. There are some elegiac moments in the book which are quite powerful.… (more)
Fewer