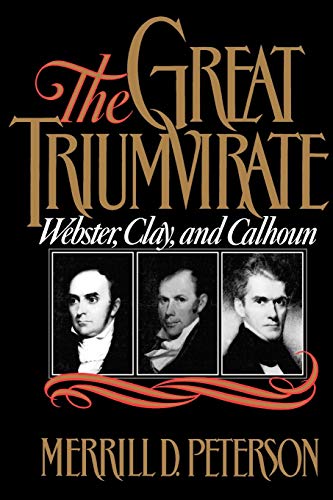 Enormously powerful, intensely ambitious, the very personifications of their respective regions--Daniel Webster, Henry Clay, and John C. Calhoun represented the foremost statemen of their age. In the decades preceding the Civil War, they dominated American congressional politics as no other figures have. Now Merrill D. Peterson, one of our most gifted historians, brilliantly re-creates the lives and times of these great men in this monumental collective biography. Arriving on the national scene at the onset of the War of 1812 and departing political life during the ordeal of the Union in 1850-52, Webster, Clay, and Calhoun opened--and closed--a new era in American politics. In outlook and style, they represented startling contrasts: Webster, the Federalist and staunch New England defender of the Union; Clay, the "war hawk" and National Rebublican leader from the West; Calhoun, the youthful nationalist who became the foremost spokesman of the South and slavery. They came together in the Senate for the first time in 1832, united in their opposition of Andrew Jackson, and thus gave birth to the idea of the "Great Triumvirate." Entering the history books, this idea survived the test of time because these men divided so much of American politics between them for so long. Peterson brings to life the great events in which the Triumvirate figured so prominently, including the debates on Clay's American System, the Missouri Compromise, the Webster-Hayne debate, the Bank War, the Webster-Ashburton Treaty, the annexation of Texas, and the Compromise of 1850. At once a sweeping narrative and a penetrating study of non-presidential leadership, this book offers an indelible picture of this conservative era in which statesmen viewed the preservation of the legacy of free government inherited from the Founding Fathers as their principal mission. In fascinating detail, Peterson demonstrates how precisely Webster, Clay, and Calhoun exemplify three facets of this national mind.… (more)

Daniel Webster : the man and his time by Robert Vincent Remini
Henry Clay : the essential American by David Stephen Heidler
Arguing about slavery : the great battle in the United States Congress by William Lee Miller
John C. Calhoun : a biography by Irving H. Bartlett
Waking Giant: America in the Age of Jackson by David S. Reynolds
6 more
Free Soil, Free Labor, Free Men : The Ideology of the Republican Party Before the Civil War by Eric Foner
Reconstruction : America's unfinished revolution, 1863-1877 by Eric Foner
Copperheads: The Rise and Fall of Lincoln's Opponents in the North by Jennifer L. Weber
The Dred Scott Case: Its Significance in American Law and Politics by Don Edward Fehrenbacher
Lincoln at Cooper Union: The Speech That Made Abraham Lincoln President by Harold Holzer
A country of vast designs : James K. Polk, the Mexican War, and the conquest of the American continent by Robert W. Merry
Fewer