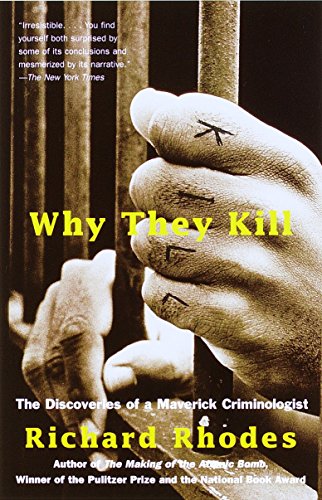 Why They Kill: The Discoveries of a Maverick Criminologist

Richard Rhodes, Pulitzer Prize-winning author of The Making of the Atomic Bomb, brings his inimitable vision, exhaustive research, and mesmerizing prose to this timely book that dissects violence and offers new solutions to the age old problem of why people kill.Lonnie Athens was raised by a brutally domineering father. Defying all odds, Athens became a groundbreaking criminologist who turned his scholar's eye to the problem of why people become violent. After a decade of interviewing several hundred violent convicts--men and women of varied background and ethnicity, he discovered "violentization," the four-stage process by which almost any human being can evolve into someone who will assault, rape, or murder another human being. Why They Kill is a riveting biography of Athens and a judicious critique of his seminal work, as well as an unflinching investigation into the history of violence.… (more)

LibraryThing member drneutron
In the introduction to Why They Kill, Richard Rhodes describes a pretty horrific episode in his childhood where he as forced to confront the violence that so many have experienced. Many of his books deal with different aspects of violence, and he uses these works to understand his experience. In Why They Kill, Rhodes focuses on ultraviolent criminals - why they do what they do and how they become so violent in the first place.

Why They Kill is really two books in one. The first is a biography of Lonnie Athens, the maverick criminologist of the subtitle. He's a product of the world of the ultraviolent criminal, but managed to escape into a rather unwelcoming academia. The biographical section also includes a detailed explanation of Athens' theory of violentization, the process he proposes by which ultraviolent criminals are made. The second book is a series of tests of Athen's theory, for example against famous folk such as Lee Harvey Oswald and Mike Tyson.

Criminology is well outside my area of expertise, but Athens' theory seems sensible to me. It appears to explain the process by which people become violent and the mitigations discussed at the end of the book are in line with successful intervention programs. I suspect that the situation, however, is more complicated than presented here. Genetic factors are ignored, and the possibility of mental illness or learning disabilities in violent offenders are dismissed out of hand. Rhodes, and by extension, Athens, claims that the theory explains every violent person, however cases which don't appear to fit the theory are assumed to be cases where the person (or the researcher) are not telling the whole story and so the argument becomes somewhat circular.

All in all, I think the book was worth reading, although Rhodes was a bit drier in this one than in others of his that I've read. The ideas should be taken with a grain of salt, but are well worth thinking about.… (more)
2 more
LibraryThing member allthesedarnbooks
This was an interesting book that I picked up after reading about it on LT. Richard Rhodes writes about Lonnie Athens, a criminologist, and the theories he has developed about the nature of human violence. I'm not sure that Athens' theories explain all violence EVER, as Rhodes seems to, but the book is certainly food for thought. I had some problems, as an anthropology student, with the chapter on violence in "primitive" societies, in particular. Some of the sociology chapters were very dense--- I'm not sure I'll ever understand Athens's theory of the self, as explained, let alone the earlier theories that were merely referenced. The most interesting chapters to me were the ones on medieval history and on modern warfare. Overall, an intriguing read, and I came away thinking about the nature of violence and also impressed, once more, with the need to curb child abuse and other forms of violence, particularly against children. Well worth reading, if not without its flaws.… (more)
LibraryThing member jwhenderson
Richard Rhodes is one of my favorite authors. I first encountered his work when I read The Making of the Atomic Bomb. His book, Why They Kill, is unique in my experience, in that it is a blend of both biography and sociology. It is the biography of Lonnie Athens who lived a violent life as a youth and later dedicated his life to the investigation of the source of violence in criminals. It is also a presentation of Athens' findings and an examination of the results of applying those findings to criminals who Athens had not studied. The result of this, due greatly to the writing skills of the author, is a fascinating and unique story of the sociology of criminal life and the pathology of violence. This is a challenging book for those readers interested in why some humans kill.… (more)
Fewer

All God's children : the Bosket family and the American tradition of violence by Fox Butterfield