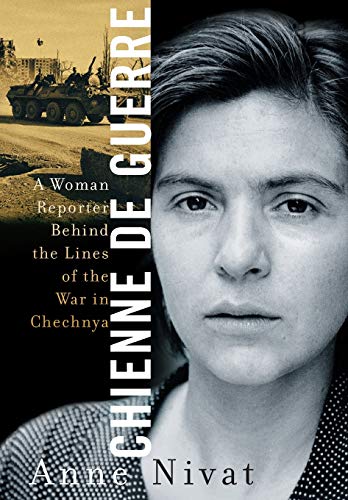 Chienne de guerre : a woman reporter behind the lines of the War in Chechnya

Two years ago, when she was thirty years old, Anne Nivat decided to see first-hand what war was all about. Russia had just launched its second brutal campaign against Chechnya. And though the Russians strictly forbade Westerners from covering the war, the aspiring French journalist decided she would go. There are two very real dangers in Chechnya: being arrested by the Russians and being kidnapped by the Chechens. Nivat strapped her satellite phone to her belly, disguised herself in the garb of a Chechen peasant, and sneaked across the border. She found a young guide, Islam, to lead her illegally through the war zone. For six months they followed the war, travelling with underground rebels and sleeping with Chechen families or in abandoned buildings. Anne trembled through air raids; walked through abandoned killing fields; and helped in the halls of bloody hospitals. She interviewed rebel leaders, government officials, young widows, and angry fighters, and she reported everything back to France. Her reports in LibĂ©ration led to antiwar demonstrations outside the Russian embassy in Paris. Anne's words move. They are not florid, but terse, cool, dramatic. More than just a war correspondent's report, Chienne de Guerre is a moving story of struggle and self-discovery--the adventures of one young woman who repeatedly tests her own physical and psychological limits in the extremely dangerous and stressful environment of war.… (more)

LibraryThing member tsryan
This book is a fascinating look at life in Chechnya. It would be of interest for its behind the lines look at Chechnya during a time when the region was largely inaccessible (except to those journalists accompanied by Russian minders) written by anyone, but in a society where gender shapes experience so sharply, Nivat's experiences as a woman traveling through war-torn Chechnya are a particularly fascinating read.… (more)

Dispatches by Michael Herr
The Man Without a Face: The Unlikely Rise of Vladimir Putin by Masha Gessen
Safe Area Gorazde: The War in Eastern Bosnia 1992-5 by Joe Sacco