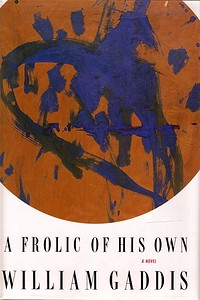 A frolic of his own: a novel

With the publication of the Recognitions in 1955, William Gaddis was hailed as the American heir to James Joyce. His two subsequent novels, J R (winner of the National Book Award) and Carpenter's Gothic, have secured his position among America's foremost contemporary writers. Now A Frolic of His Own, his long-anticipated fourth novel, adds more luster to his reputation, as he takes on life in our litigious times. "Justice? - You get justice in the next world, in this world you have the law." So begins this mercilessly funny, devastatingly accurate tale of lives caught up in the toils of the law. Oscar Crease, middle-aged college instructor, savant, and playwright, is suing a Hollywood producer for pirating his play Once at Antietam, based on his grandfather's experiences in the Civil War, and turning it into a gory blockbuster called The Blood in the Red White and Blue. Oscar's suit, and a host of others - which involve a dog trapped in an outdoor sculpture, wrongful death during a river baptism, a church versus a soft drink company, and even Oscar himself after he is run over by his own car - engulf all who surround him, from his freewheeling girlfriend to his well-to-do stepsister and her ill-fated husband (a partner in the white-shoe firm of Swyne & Dour), to his draconian, nonagenarian father, Federal Judge Thomas Crease, who has just wielded the long arm of the law to expel God (and Satan) from his courtroom. And down the tortuous path of depositions and decrees, suits and countersuits, the most lofty ideas of our culture - questions about the value of art, literature, and originality - will be wrung dry in the meticulous, often surreal logic and language of the law, leaving no party unscathed. Gaddis has created a whirlwind of a novel, which brilliantly reproduces the Tower of Babel in which we conduct our lives. In A Frolic of His Own we hear voices as they speak at and around one another: lawyers, family members, judges, rogues, hucksters, and desperate men (and women) looking for a buck. Above all these is Oscar's voice - the outraged cry of the new anachronism, the self-proclaimed "last civilized man" rendered frail before the behemoth of the law, the servant and warrior of the soul of our century: money.… (more)

National Book Foundation
Never a word out of place, never a clinker or clunker of a book, [Gaddis] was a comic genius who skewered both reason and ridiculousness in almost equal measures, until you were unsure which is which.
— 1 more
People
A Frolic of His Own is written almost entirely in dialogue with little punctuation. Gaddis is an inventive, sophisticated writer. The argument he has prepared for and against Oscar Crease is a dizzy romp of a novel—important, original and intelligent.

LibraryThing member kristykay22
A Frolic of His Own by William Gaddis (1994) isn't really an easy read, but it is a rather fun one. I haven't read any other of Gaddis' books, but if the online book review community is to be believed, this is his most accessible novel. Made up primarily of dialogue (with no quotation marks,
Show More
unconventional punctuation, and speakers changing in mid sentence), interspersed with lengthy legal briefs and sections from an unpublished play, the format takes a little getting used to. Once you get a feel for the characters, though, the style becomes almost naturalistic -- the conversations more actual and penetrating than in a conventional novel.

The story centers around Oscar Crease, a man who comes from money, lives alone in a giant isolated family house, teaches history, and has somehow managed to hit himself with his own car while jump starting it. He naturally sues the car manufacturer. At the same time, a blockbuster movie set during the Civil War has just come out, loosely based on the true story of Oscar's grandfather. But Oscar wrote a play interpreting the same events 30 years ago, so he is also suing the studio for stealing his work. His step-sister, Christina, and her husband, Harry (who is a big-shot lawyer), are in and out of the house giving advice, making tea, putting out fires, and having a much needed drink. Also in and out (but mostly in) is Lily, Oscar's silly girlfriend who is hiding from her estranged husband, trying to reconcile with her religious family, and constantly in need of a little more money. And she is possibly the most admirable of all of them. Not in the book at all, except as the gigantic motivation behind nearly every one of Oscar's actions, is Oscar's father, a 97 year old Federal judge who just made an unpopular ruling on the case of a dog who got stuck in the base of a gigantic modern art sculpture.

Got it all straight?

The ups and downs and downs and ups of this group make for a very engaging plot. And since they get worked up over a misplaced letter or the wrong thing for dinner (as well as winning or losing thousands of dollars, death, and more death), I found myself often having to take a break from this book and read a magazine when the frantic pace of the streaming conversation got to be too much for me. This is not a relaxing read, in any sense.

It is, however: often very funny, an interesting exercise in style, very long, a bit curmudgeonly, viciously satiric of the legal profession, satisfyingly complex, and ultimately a good read. If you are up for a challenge, then I highly recommend it.
Show Less
6 more
LibraryThing member Dorritt
There’s the makings of a terrific work of satire here. I only wish the author, William Gaddis, had made some different choices (or an editor had forced him to do so) … like stripping away about 250 pages of narrative overkill and sacrificing the whole pretentious “no punctuation” thing in
Show More
the name of readability, which combination seriously impaired my ability to appreciate Gaddis’s wit.

I get what Gaddis is trying to accomplish here. This story of a curmudgeonly old academic who’s simultaneously embroiled in two lawsuits (in one, he’s trying to sue the manufacturer of his car after he somehow manages to drive over himself; in the other, he’s trying to sue a big-name Hollywood producer over his gratuitously gruesome new Civil War film, the screenplay of which Oscar believes to have been plagiarized from his own Civil War play) is a brilliant skewering of modern society - primarily our convoluted and inherently unjust legal system, but also Hollywood, the marketing/advertising profession, wealthy upper class liberals, artists, gold-diggers, tree-hugging PETA liberals, the real estate industry, television, and the relentless march of suburbia. In college I remember studying the great Augustine satirists – Alexander Pope (The Rape of the Lock), John Gay (The Beggar’s Opera), and Jonathan Swift (whose “A Modest Proposal” explored the idea of turning the Irish into food, thereby solving the “Irish problem” and alleviating hunger simultaneously) – and am comfortable positing that in the afterlife, Gaddis will be welcomed with open arms within their ranks.

So what’s my problem with this? My first issue, as I mentioned earlier, is that it’s at least 250 pages too long. Slogging through all 500+ pages of this felt like sitting through a 40-minute fireworks show: eventually, no matter how dazzling the pyrotechnics, there comes a point where you start checking your watching and wondering if the grand finale will ever come. Gaddis’s looooong narrative diversions – the 40pg long transcript of Szyrk v. Spot (in which an oddly obtuse dog wanders into a statue and can’t be bothered to extricate himself, provoking the townfolk to sue the artist for permission to destroy the statue to remove him), the 40+pgs of excerpts from Oscar’s play – are especially tedious; one wishes an editor had had the nerve to remind Gaddis that satire is best served fresh and steaming, never dragged out so long that it cools and grows stale.

My other major quibble with this novel? Gaddis’s deliberately laborious narrative style. I get that it takes a certain genius to create characters with voices so distinctive that they don’t require identification, which Gaddis has accomplished here. This doesn’t, however, justify his decision to entirely abandon the use of quotation marks and dialog tags. The effort required to ensure one understands who is speaking at any given time slows the pace of reading to a crawl. (See my previous remark about satire needing to be served fresh and steaming.) But apparently this is Gaddis’s “shtick” – or so I gather from this passage lifted from a New York Times review: “[Gaddis’s] first novel, "The Recognitions" (1955), is one of late modernism's sacred monsters, a 900-page display of polymathic erudition, which, though crowded with incident and allusion, shows minimal concern for narrative movement or the in-depth portrayal of any of its myriad characters. With "JR" (1975) Mr. Gaddis developed and ruthlessly exploited a technique of almost nonstop, scarcely punctuated dialogue, which he continued to employ in his next two novels. It is a technique that demands unflagging vigilance on the reader's part.” Again, one wishes that an editor had had to nerve to suggest to Gaddis that, having already earned his National Book Award, he might lighten up a little and cut his readers some slack in this outing.

There is genius here, I don’t dispute. (For instance, there’s this on-going bit about a lawsuit between the Vatican and RC Cola over the rights to use the initials RC (“Roman Catholic”) that eventually devolves into discussions of a joint marketing campaign – which should be outrageous but which, like all authentically acerbic satire, leaves the lingering taste of bile in one’s throat as it goes down). But whether the payoff was worth the time I spent slogging my way through all 500 pages of this, I’m still not entirely convinced.
Show Less
LibraryThing member abirdman
Often funny, even more often exasperating. This is a great book by a great writer who seems swept away by the excitement and joy of the act of writing. It's also bad-tempered, grumpy, doddering, and revealing of the author's growing awareness of the loss of power caused by aging.
LibraryThing member DavidO1103
Amazing, long, funny send-up of litigious society... interesting writing style, with very long run-on sentences...
LibraryThing member pc_cambridge
Gaddis can be a bit hard to take for many people, but in my opinion this is his best (and most approachable) work. Once you get used to the unconventional writing style, it's easy to get lost in the back and forth of the constantly changing dialogues.
LibraryThing member tmph
Just started. I've owned this book for many years, think Gaddis is the greatest American novelist of the latter half of the 20th c. (but I repeat myself), and this is very, very much Gaddis. It's a delight so far.

And, now, finished. A wonderful, rich, delightful, sad, emotional, unique except to
Show More
Gaddis novel.
Show Less
LibraryThing member HadriantheBlind
Oh god this is amazing. I'm exhilarated and unabashedly proud I could finish something by Gaddis. The legalese alone is excellent, hilariously absurd - probably the best lampooning of the whole profession in years. I particularly enjoyed the 'dog in the statue' opinion.

Of course, this leaves
Show More
several hundred pages of book left. This, too, has its own sultry charms. The prose is thick and thorny with references, and almost wholly dialogue, with an occasional descriptive sentence tossed in to help the poor reader regain their bearings. The dialogue is also brilliant - Gaddis, to put it simply, knows how Americans talk.

I'm laying it on a bit thick here, so I'll stop. But read it - if you can handle it.
Show Less
Fewer