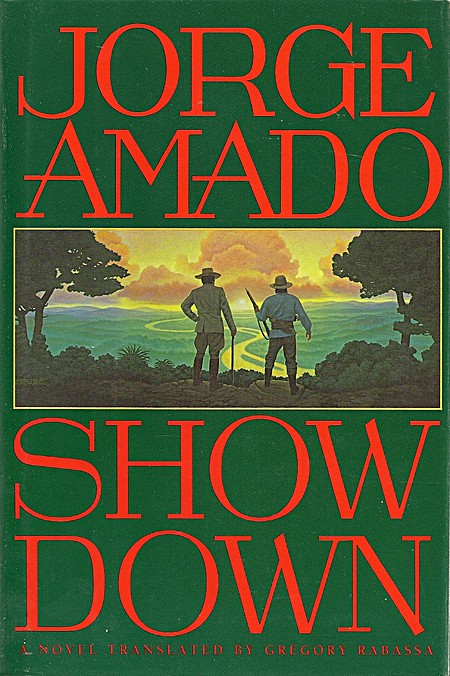 A classic Brazilian "Western" full of romance and adventure, violence and courage, and peopled with wonderfully earthy characters from the legendary author's childhood.   "Set in Bahia at the turn of the century, Showdown is brimming with the gunmen, fugitives, prostitutes and other characters who settled that sunbaked northeastern state."--The New York Times   "[Jorge] Amado has returned to some of his earliest, most radical concerns, confronting Brazilian society, memory, and mythmaking, and aiming to show, by anecdote, how the Brazil of the modernizing present has buried its (criminal) past."--Commentary   "The Brazil [Amado] writes about in Showdown shares many of the traditions of the American frontier, and that is something Americans can relate to."--Linda Grey, former Bantam president and publisher   "Showdown is a combination of the old Amado, who wrote Bahian historical novels, and the new Amado, with the spirit of Gabriela."--Gregory Rabassa, National Book Award-winning translator of Showdown… (more)

LibraryThing member kristelako
It's a shame that while other Latin American writers have achieved popularity in recent years, Amado remains in relative obscurity. I first encountered his work in my university library where I borrowed and fell in love with "Captains of the Sand." It was extremely good luck (serendipity?) that lead me to my copy of "Showdown" in a used bookstore a few weeks later.

I wish I could adequately describe the sheer sensory *pleasure* it was to read this book for the first time. Reading "Showdown" is like entering an overcrowded bar on a Friday night--rowdy, noisy, with the constant threat of a drunken brawl ready to erupt any second. It tells the story of a town built by hands of bandits and outcasts, a Brazilian equivalent of the Wild West. Cititzens include escaped slaves, prostitues and even a Turk who traveled half-way around the world to build a convenience store in the middle of his Promised Land.

Amado's characters make you laugh out loud in one chapter and break your heart in the next. They face great trials and scandals together and it's amazing how in their world of "immorality" and "lawlessness," they emerge more selfless and noble than they ever imagined themselves to be.

If my house ever catches on fire (knock on wood) and I need to choose only one book to save from my library, it'll be this one. Not bad for a 70 peso book, no?… (more)
2 more
LibraryThing member gbill
In a word, tired. Definitely not his best. This is the story of the founding of the town of Tocaia Grande, a city in the Bahia backlands of Brazil’s cacao region, and it reads like a South American ‘western’. It starts off well enough and there are flashes of brilliance, but it quickly gets repetitive.

The 75-year-old Amado goes to the well too often with tired old clichés. Aside from almost all characters having an insatiable need for sex, some examples of this: a parrot that swears. Allusions to men so desperate they have sex with animals. Well-hung black men, who are likened to ‘superb animals’. Woman preserving their virginity before marriage by having anal sex. And on and on. There is little subtlety or emotional depth to any of it, and it seems Amado is making the plot up as he goes along, believing himself to be more interesting with these little ‘spicy bits’ than he really is.

The book is also misogynistic. I wrestled with that a bit in Tereza Batista and maybe came in a bit sensitized, but I can’t tell you how many times the word “whore” is used here. Woman are categorized over and over again as virgins or whores, and being a prostitute comes across as a perfectly normal, happy thing, heck, providing a community service. As soon as a teenage girl begins showing signs of maturing, men start salivating over her. A godfather ‘rescues’ a young girl who’s been abused by her own father, only to immediately begin ogling her and going to bed with her too. Lastly, after a woman dies, the biggest thing on people’s (and Amado’s) minds is “who’d popped her cherry”, sparking endless debate and speculation. Ugh.

I would recommend Dona Flor and Her Two Husbands or maybe Tereza Batista, but not Showdown.… (more)
LibraryThing member richardderus
It's Jorge Amado, how bad can it be? A strong book, though it's certainly not up to the brilliance of "Gabriela, Clove and Cinnamon."
Fewer