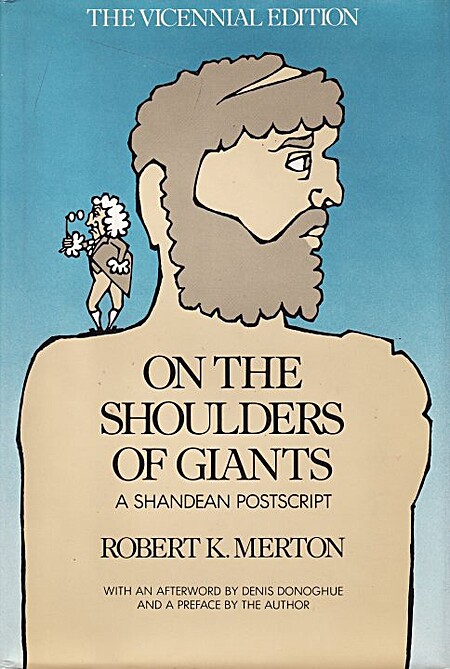 On the shoulders of giants : a Shandean postscript

With playfulness and a large dose of wit, Robert Merton traces the origin of Newton's aphorism, "If I have seen farther, it is by standing on the shoulders of giants." Using as a model the discursive and digressive style of Sterne's Tristram Shandy, Merton presents a whimsical yet scholarly work which deals with the questions of creativity, tradition, plagiarism, the transmission of knowledge, and the concept of progress. "This book is the delightful apotheosis of donmanship: Merton parodies scholarliness while being faultlessly scholarly; he scourges pedantry while brandishing his own abstruse learning on every page. The most recondite and obscure scholarly squabbles are transmuted into the material of comedy as the ostensible subject is shouldered to one side by yet another hobby horse from Merton's densely populated stable. He has created a jeu d'esprit which is profoundly suggestive both in detail and as a whole."--Sean French, Times Literary Supplement… (more)

LibraryThing member hermannstone
a real jewel for those with an antiquarian bent
1 more
LibraryThing member waitingtoderail
A brilliant skewering of shoddy scholarship. Merton traces the origins of an aphorism often credited to Isaac Newton and brilliantly uncovers a history of misattributions, misquotations,and other scholarly laziness stretching back to the 12th century. A masterpiece of pedantry, Merton goes so far as to examine 12th century artistic representations of dwarves positioned on the shoulders of giants (he finds 4 examples!) and whether they sit or stand.… (more)
Fewer

The Nature of the Book: Print and Knowledge in the Making by Adrian Johns