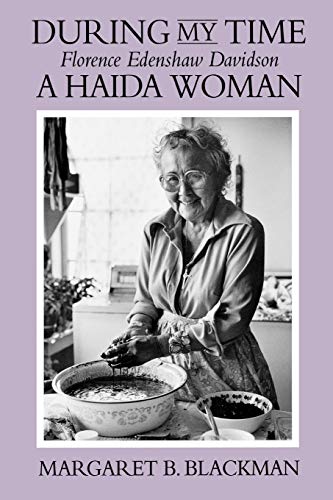 During my time : Florence Edenshaw Davidson, a Haida woman

by Margaret B. Blackman

This book is the first life history of a Northwest Coast Indian woman. Florence Davidson, daughter of noted Haida carver and chief Charles Edenshaw, was born in 1896. As one of the few living Haida elders knowledgeable bout the culture of a bygone era, she was a fragile link with the past. Living in Masset on the Queen Charlotte Islands, some fifty miles off the northwest coast of British Columbia, Florence Davidson grew up in an era of dramatic change for her people. On of the last Haida women to undergo the traditional puberty seclusion and an arranged marriage, she followed patterns in her life typical of women of her generation. Florence's narrative -- edited by Professor Blackman from more than fifty hours of tape recordings -- speaks of girlhood, of learning female roles, of the power and authority available to Haida women, of the experiences of menopause and widowhood. Blackman juxtaposes comments made by early observes of the Haida, government agents, and missionaries, with appropriate portions of the life history narrative, to portray a culture neither traditionally Haida nor fully Canadian, a culture adapting to Christianity and the imposition of Canadian laws. Margaret Blackman not only preserves Florence Davidson's memories of Haida ways, but with her own analysis of Davidson's life, adds significantly to the literature on the role of women in cross-cultural perspective. The book makes an important contribution to Northwest Coast history and culture, to the study of culture change, to fieldwork methodology, and to women's studies.… (more)