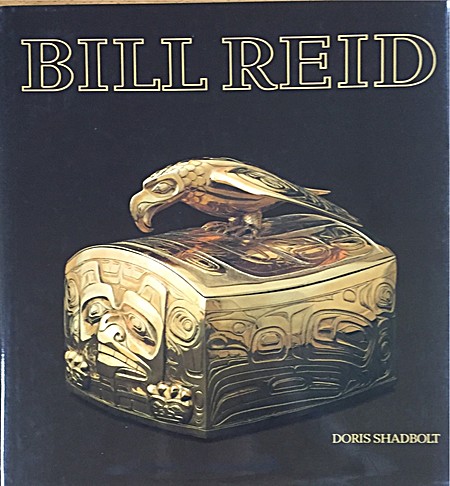 When Bill Reid, one of North America's great artists, died on March 13, 1998, he left behind a legacy of magnificent art that drew deeply on that of his Haida ancestors. His work continues to be exhibited internationally and is in many private and public collections around the world. This book celebrating the artist and his work was first published in 1986. For the updated edition, Doris Shadbolt has written a new chapter covering Reid's last years from 1987 to 1998, including his masterwork, the great bronze sculpture titled The Spirit of Haida Gwaii, as well as the moving details of his ceremonial Haida burial on Haida Gwaii. In a long career, Reid embraced many art forms, driven always by a passion for the well-made, well-crafted object. This impulse, combined with his gradual rediscovery and rekindling of a rich Haida cultural heritage, informed and inspired his development as a visual artist of tremendous power and brilliant accomplishment. Lavishly illustrated with photographs of Bill Reid's major works and events from his life, this new edition features the addition of more than 40 colour photographs.… (more)

LibraryThing member joumanamedlej
I had no reason to pick up my copy of Bill Reid when I did, having never heard of the man and not being particularly interested in the art of the Northwest Coast Indians. But somehow after I first glimpsed it, it nagged at me until I gave in.
This biography doubling as a look over the shoulder of a versatile artist and into a whole culture opened new worlds to me.

Bill Reid single-handedly revived an artistic tradition that was on the verge of vanishing, and one whose power of conceptualization and bold stylization is well worth studying by today's designers. This he did with daunting versatility in scale and material, from wooden totem poles to golden rings. A great number of his works are shown in this volume and better yet, discussed, allowing full appreciation of the thought behind the forms. Beyond this, it is Haida art as a whole that is evoked and explained, and I don't think it's possible to finish reading without gaining a fascination for it. Personally my impression of that art went from "tight mess of eyes and teeth" that did nothing to my aesthetic sensibilities to "stunning conceptual stylization of reality" that humbled and challenged my designer nature. Bill Reid's works are not just masterpieces of the medium they were made in, they are cultural artifacts.

This superb book, winner of two awards, may address a niche: specific artisans building a library, or students of ethnic or American Indian cultures. Yet if it got me totally enthused about both the man and the people, it would probably convert anyone who can appreciate ancient artistic traditions.… (more)

Eagle transforming : the art of Robert Davidson by Robert Davidson
A World of Faces: Masks of the Northwest Coast Indians by Edward Malin
Kwakiutl Art by Audrey Hawthorn
Northwest Coast Indian art : an analysis of form by Bill Holm
Totem Poles. Volume II - Totem Poles According to Location by Marius Barbeau
23 more
Pictures Out of My Life by Pitseolak,
Haida art by George F. MacDonald
The black canoe : Bill Reid and the spirit of Haida Gwaii by Robert Bringhurst
Looking at totem poles by Hilary Stewart
Solitary raven : the selected writings of Bill Reid by William Reid
Northern Haida master carvers by Robin Kathleen Wright
The spirit of Haida Gwaii : Bill Reid's masterpiece by Ulli Steltzer
Images, stone, B.C. : thirty centuries of Northwest coast Indian sculpture : an exhibition originating at the Art Gallery of Greater Victoria by Wilson Duff
Those Born at Koona by John Smyly
Haida monumentalart : villages of the Queen Charlotte Islands by George F. MacDonald
Looking at Indian art of the Northwest Coast by Hilary Stewart
Smoky-Top: The Art and Times of Willie Seaweed by Bill Holm
Arts of the raven : masterworks by the Northwest Coast Indian : an exhibition in honour of the one hundredth anniversary of Canadian Confederation [held at] the Vancouver Art Gallery, 15 June-24 Sept., 1967 : catalogue by Wilson Duff
Indian Art of the United States by Frederic H. Douglas
The raven steals the light by Bill Reid
Crooked Beak of Heaven: Masks and Other Ceremonial Art of the Northwest Coast by Bill Holm
Robert Davidson : eagle of the dawn by Robert Davidson
Spirits of the water : Native art collected on expeditions to Alaska and British Columbia, 1774-1910 by Steven C. Brown
Bill Reid and beyond : expanding on modern Native art by Karen Duffek
The Box of Daylight: Northwest Coast Indian Art by Bill Holm
Chiefly feasts : the enduring Kwakiutl potlatch by Aldona Jonaitis
Understanding Northwest Coast Art: A Guide to Crests, Beings and Symbols by Cheryl Shearar
The transforming image : painted arts of Northwest Coast First Nations by Bill McLennan
Fewer