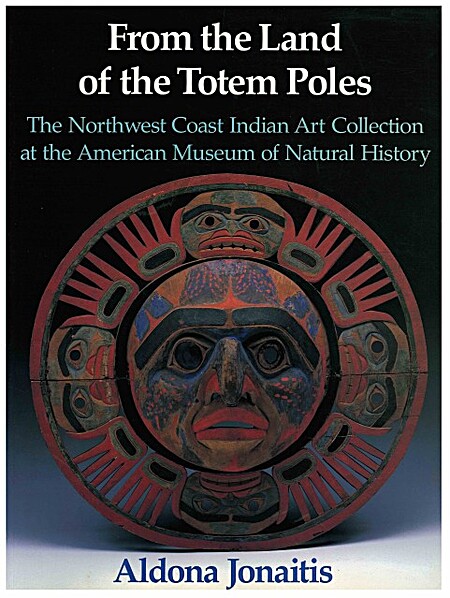 From the land of the totem poles : the Northwest Coast Indian art collection at the American Museum of Natural History

In 1943 French anthropologist Claude Levi-Strauss arrived in New York City, along with countless refugees from the war in Europe. He became a frequent visitor to the North Pacific Hall at the American Museum of Natural History where he could lose himself in what he affectionately called "a magic place where the dreams of childhood hold a rendezvous, where century-old tree trunks sing and speak, where undefinable objects watch out for the visitor, with the anxious stare of human faces, where animals of superhuman gentleness join their little paws like hands in prayer." Two and a half million people now visit the Museum each year to share in these enchantments.The American Museum houses the most extensive collection of Northwest Coast Indian art in existence. It includes material from virtually every Indian group that once lived along the west coast of British Columbia and Alaska. In this book, Dr. Aldona Jonaitis traces the history of this magnificent collection, beginning in the late nineteenth century before those coastal peoples had much contact with Europeans, and their customs, languages, and art were still intact. Shortly after the collections was formed, between 1880 and 1910, Indian culture in this region went into a severe decline, to be revived a half century later as another generation of North Americans discovered their heritage.The story alternately captivates and distresses. Populations were decimated by disease in the last years of the nineteenth century, art objects left their makers' hands bound for museums all over the world, traditional rituals were outlawed, and governments exerted strong pressures on the Indians to become assimilated. On the other side of the story are the individuals--like Franz Boas, under whose direction much of the Museum collection was assembled, Lt. George Thornton Emmons, who immersed himself in the native cultures, George Hunt, prized Kwakiutl informant for Boas and other researchers, and Charles Edenshaw, master Haida carver and painter--whose colorful lives intersect the Age of Museum Collecting.Artifacts in the American Museum come alive through the details Dr. Jonaitis provides of their cultural context, their traditional uses, and their acquisition by collectors. Viewers see spoons and bowls that held food eaten by Boas at a potlatch; feel the spirit power emanating from a shaman's charm removed from its owner's grave by Lieutenant Emmons; sense the sadness behind the display of family crests on a house model carved by Edenshaw.Nearly 100 color plates in the book and numerous historical photographs from the Museum's archives recall a bygone era and are a tribute to the stunning artworks of the North Pacific region. Dr. Jonaitis has written the first book devoted solely to the collection of Northwest Coast Indian art in the American Museum of Natural History. As such, the book is both an essential work for scholars and a valuable resource for the general reader.… (more)